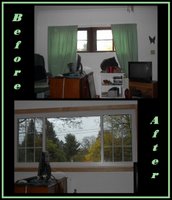 windows are in and they are absolutely wonderful! It is a daily miracle to get up and see so much light and my wonderful new view. (For the curious, I have posted a set of pictures showing a bit of the installation process down below today's post.) There were even a few wonderful days, before it got chilly, when I could sit here at my desk and open a window to let in fresh air and the sound of the neighbor’s kids playing. Fantastic. There are squirrels out there and kitties and even an occasional dog roams by. I’ve been watching the leaves change and fade on trees off in the distance. One of my neighbors even waves to me from time to time when she passes by. I’m a person! I’m hoping that Halloween will bring trick or treaters too. I’m guessing that it will since the people next door set up a pair of inflated ghosts on their front yard back in September. It took me a while to realize that they were ghosts and not snowmen. (There is some basis for this beyond senility because the angle from which I originally saw them was such that all I saw was white blobs. I don’t know why snow men was what I came up with instead of ghosts but...) Since I figured out what they are I have rather enjoyed the little war that the Angel look-alike kitty who lives next door is waging on them. When I opened my door a number of weeks back, there she sat looking very pleased with herself next to deflated pile of ghosts. They continue to deflate and reappear on a fairly regular basis. As I’m writing this, I believe we are on round seven. Seems to me that the kitty is winning.

As predicted, my Angel is delighted with the windows. What has been especially

interesting to me, though, is what is happening with Tara Grace. Both my cats were rescued. Angel was half starved and sick with giardia, but she was only 4 months old and except for being physically very small, she doesn’t seem to carry many scars - physical or emotional from her time in the big world. She is relentlessly curious, playful (you can't tell from the picture) and full of life and joy. She plays with abandon and hugs the same way.

Tara Grace is another story. It’s hard to know how old she is, but she lived outside for a long time. She was clearly severely malnourished from an early age. She still weighs only 5 pounds, is small and when you touch her body, you can feel how fragile - for want of a better word - it is. (Not that she is really fragile. Try to put her in a carrier and you’ll find out just how wiry and tough she can be... ) But she was deeply damaged by her time on the streets. She has chronic congestion and it is more than likely that she only sees shapes and movement. She explores with a lot of sniffing, is only slowly learning to play and while she clearly craves touch, is also nervous about receiving affection.

I wasn’t sure how - or even if - she would react to the windows, but I built a little step system so she could easily access them and about a week after they were installed, late in the evening she took her first leap of faith and climbed up to the ledge, exploring somewhat gingerly behind the curtain 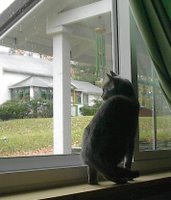 s which were already pulled shut. Much to my delight, she is now a regular visitor to the windows and to my desk where she is increasingly opening up to being touched. More intriguing is that she is more open in general. She’s playing more, which is wonderful. The down side is that she has chosen the hours between five and seven a.m. (not my favorite time of day) to play and poke at my head for affection. We need to work on some of the logistics of Tara Grace’s miracle healing, but even if it has some raggedy edges... like timing and a tendency to walk on my computer keyboard, it is still remarkable. Tara is still operating on a push/pull approach... she comes forward and then when I reach for her she runs, then returns, runs, returns... and eventually stays for petting. But her visits are getting longer each evening and her ability to sit for touch better. I can’t imagine how cruel her early life must have been that she still carries so much fear of love, especially when it is coupled with such a palpable desire for the same affection she so fears.

But then I don’t know why it should be so shocking to me. I am much the same in many ways: Hungry for love, terrified of rejection and unsure how or even whether to reach out for what I want.

New perspectives are curious things. There is the obvious impact: new views, expanded outlooks... the joy of that is unquestionable. Then there is the openness that has come with my windows... I can literally open them, of course. And I can see and be seen (a mixed blessing... I love the "seeing" part and part of me loves being seen. Since I rarely leave the house, being visible makes me more real for my neighbors (and them to me) and maybe it will even remove some of the barriers to getting acquainted with them. Then there are wonderful mysteries like the impact the new windows are having on sweet Tara Grace.

Posting this blog is another kind of new perspective. I have enormous anxiety about posting here. It feels different to me than writing my column for Suite101.com. Something about having the “pre-approval” of an authority figure (the Suite) made it "ok" for me to express myself. Here (in my head at least) it becomes a brazen act of self indulgence. Why should anyone care what I think or feel? Who do I think I am? I guess the answer in the end is that I’m me. That’s all I need to be. People will visit my “nest” if they choose to and they will either yawn their way through my thoughts or find something that connects them to their own lives.

My new perspective here is that I will try to write for me with the hope that in so doing I will be of service to others as well. That’s my perspective today. Who knows what it will be tomorrow. Like Tara Grace. Even though my world is constricted, I am exploring new corners. I love Tara’s courage even as I love Angel’s total lack of fear. They are both wonderful. I suppose from some perspective somewhere, so am I. So are you. Thanks for listening. 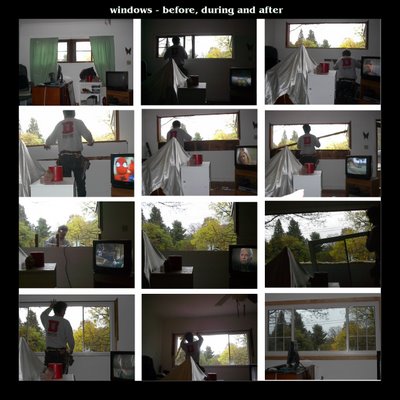