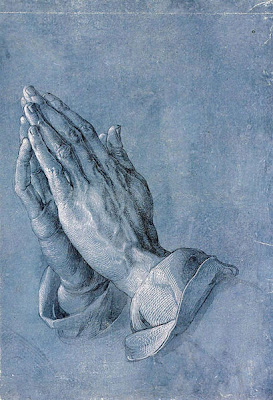 There is apparently a "movement," (a something) afoot using Psalm 109 as a subtle death-threat against our President. So-called Christians sport bumper stickers saying "Pray for Obama: Psalm 109.8. Psalm 109, verse 8 reads as follows:

"May his days be few; may another take his place of leadership."

The verse which follows says:
"May his children be fatherless, and his wife a widow."

This is Christianity? This is love of country? I wonder how people who carry such signs or put bumper stickers on their cars or wear t-shirts like this manage to rationalize it with Christian teaching. I wonder how they distinguish themselves from groups like the Taliban who use similar language, simply against different targets. Hate is hate and wishing death on anyone is about as anti-God as you can get in my understanding of all the great faiths. I think God - by whatever name one calls Him or Her - must weep at such things. I believe it hurts the souls of those who espouse it and I believe it wounds the soul of the Universal consciousness, in other words, all of us. I believe that it wounds God. I know it wounds me.

I loathed the previous administration. I wanted to see them out of office and I would have no trouble seeing them put in jail for actions which I believe to be criminal, but never ever ever ever did it occur to me to advocate for their murder... or even to wish it. If I'm going to be totally honest (and I do try to), I will confess that I had moments when I wished a house would fall on the previous administration, but I always stopped myself and asked for forgiveness and said a prayer for them when such ugliness seeped into my thinking. I tried very hard to distinguish my disgust for their political actions from them as human beings. At my worst, the idea of calling for their deaths is simply inconceivable to me. I don't wish terrorists put to death either. Just locked up. Vengeance turns us into what we hate. Vengeance is poisonous as hate is poisonous. Or that's what I believe.

In any case, I find this new "cute" coded hatred very troubling. It's not cute. There are too many crazy people out there having their fears and paranoia and racism fed by people like Glenn Beck, Sara Palin, Michele Bachmann and too many others to list. As the history of Nazi Germany and groups like Al Quaeda and the Taliban prove, a small number of people bent on hate can do profound damage in this world. It is often asked - where are the moderate Muslims when terrorist spew hate. I would ask, where are the voices of Christianity as some of their fellows are preaching hate in the guise of prayer?

To try to put your own hatred into the mouth of God seems particularly obscene to me, particularly hypocritical and un-Christian. I can't imagine but God's heart must break when people justify hate in his name. Too often those who shout their love of God the loudest use it to justify the ugliest aspects of human emotions, whether it is saying that God hate's gays or asking us to pray for the death of our President.

Visit msnbc.com for Breaking News, World News, and News about the Economy

My prayer is for peace in our hearts and in the world. That we can disagree without being disagreeable. My prayer is that we listen to the voices of our better angels and that we pray for peace in the hearts of those who are lost in hate... whatever their faith may be.
Posted by Raven at 6:00 PM

Oh, that is just sick! I'm not overly pleased with how things have gone so far with Obama but I can tell you that that is not how Christianity is supposed to be. How very sad that this is such a twisted world we live in...

Well... MY voice is right here saying that those Christians are NOT Christians! Christ never preached HATE. Ever. Not EVER. So the people who are promoting this may attend Christian churches -- but I dare say there are MANY people who attend Christian church and call themselves Christians who also never open their Bibles to find out what they actually say! As for myself... I pray regularly that NO harm come to President Obama and that his senate and his congress will actually find it in there hearts to work together as a team to bring about the best possible changes for our country. And that is what the Christians that associate with pray. I also PRAY for all those "other" Christians to actually come to kNOw Jesus and live their lives to do His will.

Raven -- false prophets and false Christianity is warned about in the Bible. No one ever thinks it's them.

I, too, agree that "Christians" who would pray for someone's death and destruction aren't Christian at all. What believers should be doing is praying for God's guidance for our world leaders -- ALL of them!

These so called Christians are the same ones who are neglecting to listen to the Lords teaching that we should respect our leaders.

It's very disturbing to me how many people claiming to be Christians are letting underlying racist feelings for Obama come out in other comments. It's just wrong.

Don't like the guy? Disagree with his political agenda? Fine on both counts, but to wish him harm because of it? Wow, how ridicules.

I hadn't seen this until your post. Sadly, because I choose not too, I haven't listened to the news in months.
Are these people Christians? In my humble opinion I don't think so. But, that's not for me to judge. May God hear our prayers.

This is SO not Christ. His Word tells us to respect and pray for those in authority over us. And if people feel the President is their enemy, Christ tells us to pray for our enemies as well...

I had not heard about this, and I'm pretty firmly rooted in interdenominational Christian ministries, so if it is any consolation, this is probably a pretty small but vocal fringe group.

Dear Raven,
I am a Christian, and I pray for America.
This is just too appalling and scaring people threatening the life of their president.
I hurt for America. She's a nation divided.
Somehow I do understand all the mothers being forced to send their sons to wage war and lay down their lives for their country, now thinking that this huge sacrifice was brought in vain.
And the veteran themselves having to live with tremendous pains for the rest of their live, should their suffering be in vain?

I think something must be done to heal the gap between the fighting parts of the world's only superpower. All this terrifying hatred from both "sides" make me shiver with realistic fear.

What happens in America do concern the rest of the world as well.

I can but pray for peace and reason.
From Felisol