Needless to say, it has been a difficult week and I completely lost track of what day of the week it is, so I am behind schedule as usual but with a better excuse this week.  I think I'll just post the words and Mr. Linky for the moment and do my exercises tomorrow if all goes well.

5:30 PM:  This week's exercises are a series of pretty lame tributes to the late Tara Grace. I'm not sure the last one makes any sense. I was tired by the time I got to it. Sorry about that.

Raven sat reading through a long, crass and rambling letter to the editor which had been penned by some moronic, ignorant turkey of a "citizen"  (not that she was biased) about Obama's birth certificate being a forgery and how school children were in danger of being indoctrinated into socialism and Islam (no explanation given as to how two such divergent and incompatible systems could be meshed together). She peppered her reading of said letter with language which her mother would not have found acceptable. Generally, she tried to meet those who engaged in racism and hatred with laughter - it seemed the best medicine and what such nonsense deserved - but today her mood was colored by grief and she was trading sorrow for crankiness. She was grateful for the purring furnace (hey -that's a pun!) of Angel's little furry body in her arms. The hugs were like a healing service they offered to one another to stave off the weeds of grief and loss. Mourning was a strange affair, full of complex and confused emotions. Like the murder of her sister, this death had caught Raven off guard, both because it was unexpected and because sometimes we don't recognize the depth of our love for another until they are gone from us. Who would have thought that 4.7 pounds of shy, stubborn gray sweetness would leave such a gaping emptiness behind her?  "We will be OK," Raven whispered to Angel. And she knew it was true. "We will be sad for a time, but only Tara's body died, not her love. That's forever." 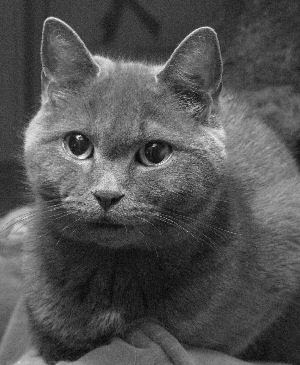 When Tara Grace first came into her life, Raven never imagined that it would be the start of a love affair (not that kind) that would touch her so deeply. Who would have believed that the sad, skinny, gray creature who was afraid to even come near her - would evolve into a source of laughter and head butts and such deep and tender emotions. Not Raven, to be honest. She has felt her heart ache with grief as Tara would sit herself 4 feet away and look with what could not be mistaken as anything but longing for affection mixed with fear and dread of receiving it. She had wondered in those early days if she wasn't making a mistake. But it hadn't been a mistake. Tara had turned out to be a gift that kept on giving, a riddle wrapped in a mystery, a complex and inspiring spirit who had come through suffering and abuse and retained her gentleness. Tara was a mix of contradictions as well. Loving her might have been frustrating to someone who wanted desperately to be able to pick her up and hug her, but she was anything but boring. She played like a ballerina, dancing around the room, batting some toy or other, but when that delicate ballerina spoke she had the raspy voice of a long-shoreman and it sounded like her words were peppered with language that might be described as colorful. Demure and delicate much of the time, she could also be like a general marshaling the troops when she was ready for her bed-time crunchies, and for all her fear of touch, she had compensated by curling up on Raven's hip during the night. In the end, Raven had discovered that that tiny, skinny little body had held a Spirit of enormous size. She had left a strange kind of quiet behind her. Not that she had been a noisy cat. She hadn't. (She had sneezed a lot and talked from time to time she was not a loud presence.) Even so, that was the best description Raven could come up with. It might be that emptiness was a better word. Whatever words you used,  huge tiny presence was gone... and she was missed. Raven was grateful to have been touched and changed by Tara's wise, gentle and loving presence in her life. 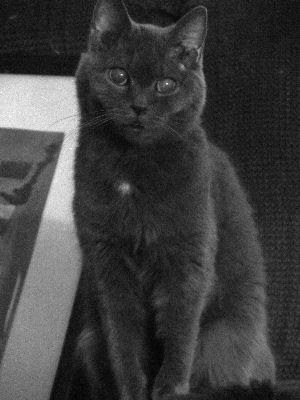 Although she never sent it, Raven had briefly pondered writing a letter to the editor on the subject of stray cats.Here was how it began:  Like many rescued animals, in the school of life, Tara Grace suffered much, learned much and taught much. She spent part of her life hiding in the weeds, rambling in the woods, maybe trying to sneak into some basement somewhere trading the "safety" of freedom to steal a night of comfort by from a warm furnace. It was clear that my Tara was brutalized at one time by some crass bully whose manhood was a forgery, some sadistic turkey who hit and starved her to make himself feel more important. Despite that, Tara never lost her gentle spirit. We pay so much lip service in our lives to love and compassion, to our reverence for life. Then we don't spay our animals and we send them out to breed with others and leave those off-spring to fend for themselves or be killed. We treat them like toys we can ignore when we are busy and play with when we are bored. We talk about being good Christians, we talk about love and generosity. We have so much to learn from these animals we abuse - sometimes actively, sometimes by indifference. But they have so much to teach us. Their capacity to love and forgive is more profound than that of most humans I have met. My cats have taught me more about life and love than any humans. I wish we as a society would take action to more actively protect them. Each of the 4 cats who has come into my life has enriched it beyond measure and made my world a better place. 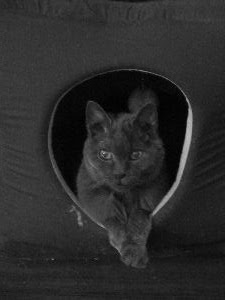 And for the mini: girls, movies, compromise, tremendous, chalk

I enjoyed your tribute to Tara Grace...