Oh, my!  I completely forgot about wordzzles. Since it's very late at night, I will just post Mr. Linky, etc. and do my exercises tomorrow.

Saturday Afternoon Update: Not feeling well... may have to wait until tomorrow.... maybe later. Not sure. Sorry.

SUNDAY AFTERNOON:  Finished at last. The last one is an introduction (of sorts) to Angel's new "friend" (not so much), Chloe.


Brigand and thief, Francois Flakes, was brilliant, charming, mercurial and totally unpredictable. Young barmaid Buttercup Benedict thought he was magnificent. She looked forward to his visits to the inn with passionate intensity, in a kind of purgatory of hope and despair. The anticipation of his glowing presence and handsome features made working at the inn more bearable. When she tried to understand the depth of her attraction to him, she was somewhat puzzled by it. It wasn't just that he would sometimes bring her flowers or fancy gifts. It wasn't the rich fabric of his clothing or the lavish way he spent money, though it was always lovely to be on the receiving end of his generosity. It wasn't even his growling ability to call the bluff of bigger, gruffer men who often viewed him with a mix of envy and admiration. In the end, she concluded that what drew her careful, orderly, cautious self to Francois was his intelligence and his free spirit, which sang a siren song to something inside her that longed to break free. She would have been flabbergasted had she known that Francois had seen and been drawn to her secret self and was doing what he could to quietly free her from the propriety in which her spirit had been so tightly wrapped by her parents and the society in which they lived. Several year later - when he asked her to marry him - he would share with her the joy he had taken in watching her blossom and would paint for her a vision of a life worth living. And in the days and years to come he made it so... gave her a life rich in adventure and joy and learning and most importantly, love.

Brigand Francois Flakes, laughed with delight when the shopkeeper brought out the exquisite gown he had ordered for his future wife - well, if she accepted his proposal, that is...  The fabric was patterned with buttercups as a tribute to his beloved's name, something he hoped would delight her as much as it delighted him. He wanted the proposal to be as romantic as possible so he planned to take her for a picnic on the bluffs. The occasion would feature a lavish meal (served in a big tent), a troubadour to sing her praises, the presentation of this dress, a ring and his smitten heart. He was dreadfully nervous, something he wasn't used to feeling, but he need not have worried; Buttercup already adored him and the thoughtful creativity of his proposal was the stuff of fairy tales. She was his.


And the 10-word:   This is a somewhat ungracious introduction of Angel's new companion whose name - at the moment - is Chloe.

Alphonse Smith was working through the mystery of how a normally orderly and careful person like himself had ended up in a miserable and seemingly endless purgatory with this growling, passionate and mercurial cat he had adopted after his sweet girl Flakes had died. For himself, he would have been content to move forward alone with Flake's sister, Snow, but she had seemed so lonely and unhappy that he had felt it would be selfish to force her to live with only him for a companion. His friend Fred had offered such a glowing description of the newcomer... "She's very sweet and loving. Seems truly gentle.'  On what planet, Alphonse asked himself... and then had to admit that she was fundamentally sweet.  A bit wild. Young. Everyone said it would work itself out. He hoped so. Meanwhile, everything felt very unsettled and he felt guilty that he was not loving this newcomer as he should. He still missed Flakes. He missed his peaceful kingdom. He missed his vision of himself as kind and loving. This too shall pass he told himself and hoped that it was true. 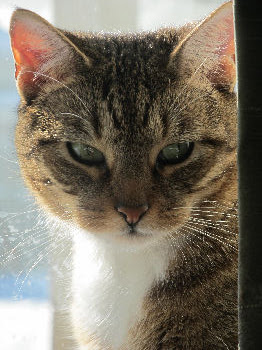 And for the mini: fragrant, emeralds, twisted, strife, pearls

It's always hard when a newcomer upsets the balance of the household! Here's hoping that she calms down & starts fitting in a little better :)