On this day of your life, dear friend,
I believe God wants you to know...

During this holy time, know that all times are holy, that
every religion holds truth, that each tradition is sacred,
and that it is in the simple sharing of love that we make
our beliefs come alive, and our dreams come true.

Let this Christmas Day remind us that Christ came to
invite us to offer love to all humankind, and to open the
door of God's kingdom to every soul.

How Many Killings is Enough?

Christmas Eve in America, firefighters ambushed fighting a fire. A week earlier 20 children and 7 adults gunned down in a school in less than 3 minutes. This is really what some people think the Founding Fathers dreamed of, lived and died for? I don't think so.

I have decided to take the holidays off from doing Wordzzles, so I will be back in January. Meanwhile, I wish you all happy holidays. I meant to put that and not Merry Christmas on my card, so I hope any  non-Christmas folks will forgive me for forgetting.  May the holidays be joyous for you and may the New Year bring peace and wisdom and kindness to us all.  I had to shrink the card pretty small to get past the fact that I'm out of allotted photo space. 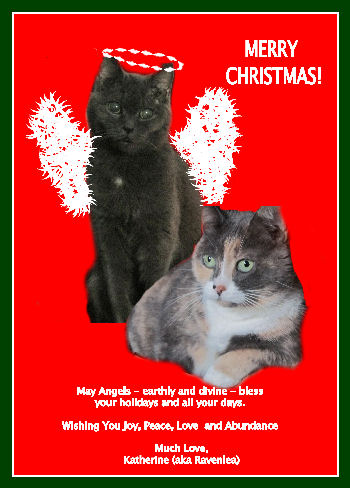 Almost forgot that it's Friday. I will post my exercises tomorrow. Very sad about the school killings in Connecticut. Very tired in general.

UPDATE:  Angel is getting a new companion this morning - rather unexpectedly - so I may not be able to do my exercises until tomorrow... hopefully then. Very anxious and not feeling very well. Apologies for the delay.

SUNDAY 5:00 PM - well, I almost forgot. Just starting now and my heart isn't in it. Kitty introductions did not go well yesterday. New kitty is secluded in back bedroom. Angel is pretending she doesn't exist. Me too, really. She is being very quiet. She has food and water until my friend can come and put a screen door so they can see and smell each other without actually interacting.  I don't have a good feeling about it, though.  Anyway, I'm tired, anxious and not feeling very well, plus listening too much to the coverage on the sad killing of so many children in Connecticut.  Just looking at the words and I think I repeated pregnant from last week or the week before. Sigh. Hate it when I do that. Thinking I may take a break for the holidays and start again in the New Year. Nobody but me plays in any case and now people will be busy with the holidays as well.

6:16: Done.  I will keep my non-readers posted about whether or not I take a break for the holidays.

The blaggard who had gotten her pregnant had seemed like the perfect man when she met him, so much so that she had thrown caution to the wind. It was no exaggeration to say that he had seemed capable of reading her heart, of being the healer of all her wounds. Early on he had given her a small carved wooden box which he had told her contained his heart. That it was empty when she opened it, might have given a wiser woman pause, but she had felt no impulse to run, only gratitude for his effort to comfort and nurture her. He had lavished her with praise and poetic gifts - a sapling planted in the yard to be nurtured and grow with their love. Hah. If only she had known. He was the classic abuser. Once she was roped in and pregnant, it all turned to garbage...his attention became destructive, his compliments turned to bellowed cruelty, the heat of his rage so wild she sometimes felt like even her skin (not to mention her heart) was singed by it. Initially she had tried to be a turtle, to pull into a shell of denial and self-protection. At first she had swallowed his poison like some kind of perverted spinach... it was for her own good, he always told her. She dreaded being a single parent, but she knew that the baby growing in her womb was, on some level, her guardian angel, for she had guided her to Dr. Shar Kohl (pronounced like charcoal), who had read the signs of her abuse and pulled - one by one - the shafts of her demented abusers arrows from her heart. Dr. Kohl had persuaded her to seek treatment and the counselors had found her a safe house in which to heal and find herself again. She dedicated her life to healing her own wounded psyche so that her baby would grow up safe, nurtured and strong in spirit.

Jason Shaft had purchased the charcoal drawing of the giant turtle at the local flea market on an impulse. He was inherently frugal and not given to such impulses, and his wife - who often went without things that she wanted - was (no exaggeration here) rather irritated by his purchase. She got over it, though, when a few months later, they discovered that the small drawing on which Jason had lavished the extravagant some of $15 turned out to be worth over $100,000.

Donna's friends and family were deeply opposed to her about her addiction to hunting through garbage to find lost treasures, some of which she used in her art work and some which she simply rescued from being lost to the world. It was the source of many heated arguments. Her mother cautioned her that it was dangerous and that it was unbecoming a lady. Her father bellowed at her that no man would ever want to marry her. They could not see that her efforts were for her creativity like Popeye's spinach.  The hunt was pregnant with seeds and saplings of artistic inspiration. And sometimes she just found small personal treasures. Her favorite ever find was a carved wooden box with the word BLAGGARD ornately etched into the wood. That little box had helped her work out a lot of anger and those who knew her work knew that you could often find the world blaggard hidden in the curves and shadows of almost every painting or work of art she created. It took 20 years, a loving husband and a great career for her parents to come around to her way of thinking, but eventually - when her first painting was purchased by the Museum of Modern Art - they did.

And for the mini: escape, plastic, gravity, sarcasm, giggle

Well, it's Friday yet again. Time goes by faster and faster the older I get.  Probably I will wait until Saturday to post my exercises (seems to be a pattern now), but wanted to make Mr. Linky and next week's words available just in case someone else has been inspired to play.

Amanda was not entirely enjoying the challenge of being pregnant. The doctors had put her on bed rest and she felt cramped and restless and needy lying next to her husband in bed. For his part, Robot (his name was Robert, but his patient attendance to her demands had earmed him the new nickname Robot) was being remarkably patient and attentive. They were fortunate that even with the pressures of his pastoral duties, he had a lot of flexibility in his schedule as well as a church full of devoted and well meaning congregants eager to play nurse to the coming child's mother. They had a kitchen full of carrot cakes, spice cakes, home made pickles and a sampling of goods from every possible category of craving satisfiers. As she poked him gently and whispered his name, he rolled over, half asleep and said groggily? "Ice cream? Pickles?" "Neither, beloved," she beamed happily, "Your son wants to play with you. I don't think we need to worry about him being slothful. He is a very energetic kicker with not a particle of compassion for his poor Mom's tummy or need for sleep." Feeling her husband's strong, gentle hand on her belly and watching the delight in his face, as he felt his child kicking in her womb, Amanda thought herself possibly the luckiest woman on earth. "I love you Pastor Robot," she smiled. "What a father you will be! You have calmed our little kicker right down with your touch and his mother too."  "I love you too," he replied, watching her eyes flicker towards sleep. In the womb, the child, wrapped in their love of each other and himself, floated in happy anticipation of his arrival into the world.

Leonard Patterson, really regretted having taken his girl friend's challenge to spend a week in this stupid, cramped cabin with no electric or heat or... other important things. She had said that the experience would spice his life up and had described the god-forsaken hell he was currently entombed in as "a beautiful pastoral setting."  The worst part of it all was the out house which smelled awful and left his butt covered with particles of dirt and who knew what else. The up side of the adventure was that he had plenty of time to think of a way to take revenge on that blighted woman. If she had wanted to break up with him, he thought, she could have just said so.

Putting the finishing touches on her famous Christmas carrot cake, Jenny dreaded facing the pressure from her family about why she was not yet pregnant. They meant well, she knew, but it was time to put the whispered speculations to rest. It was not sloth in effort or a lack of desire to be parents. It seemed that she and Josh were in that category of people who could not get pregnant. Even as she thought about it, a range of emotions played through her. Anger.... it was nobody's business. They were not robots who should be commanded to reproduce to please others - followed by feelings of needy jealousy. Why should Carla have twins and while she was barren?  And at the last - shame for those thoughts and grief for the loss of what she couldn't have.  It did not turn out as she had expected, though. The family had received the news philosophically and her sister had pulled her aside and telling her not to give up hope and sharing the secret of her own struggle with the same problem - and how she had come to be the proud mother of twin boys. It was the best Christmas gift Jenny could have hoped for... well except for the baby girl she held in her arms two Christmases later.

And for the mini: charcoal, turtle, impulse, shaft, exaggeration