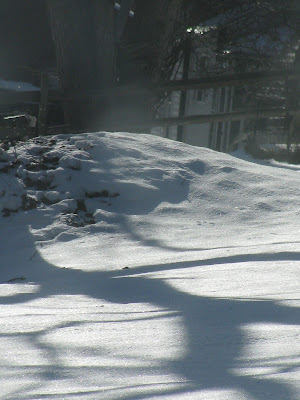 Well, I'm a pit of gloom this morning. The sky is gray and my curtains are closed (a sure sign I'm in the dumps).

I wasn't happy with the health care reform that was materializing out of the Congress, but at least it was reform. Now, it appears, hope is gone. Why? Because as they put it on the daily show last night, Obama is not a "magical Negro" who can fix all things in 12 months and we as a nation have the attention span of 3 year-olds who want everything NOW. So instead of patience and adult behavior, we're going to quash all hope of getting anything done at all and punish the team that's at least trying. We gave Bush and the Republicans 8 years to screw things up but we want it all fixed over night and instead of being adults and knowing that healing takes time, that progress is the NOT the no-new taxes bullet that is part of what got us into the hell we are now in - we are giving the store to the people who robbed it in the first place... to punish the people who are trying to get it back in the black. Agggghhhhhhh!!! God, we're a nation of idiots.

Sorry, I'm tired and depressed and I have a cold. I'm keeping my thermostat below 60 much of the time (makes me feel very brave and tough) this year in hopes of making it through the winter with heat and food. I'm lucky. I have medicare and I'm too stupid and stubborn to go to a doctor, so I've got the health care coverage we all deserve. It baffles me that universal care is even an issue, but I believe "one nation under God" means we care about and for one another.

A friend of mine was hospitalized a few months back. He has a job but he didn't have insurance yet. Now he's over $7,000 in debt. The county has grant programs, so he's getting some help with it, but how awful is a country in which too many choose not to see a doctor until it's hospital time. Or until they die because they couldn't afford to get care. Another friend is still trying to crawl out of the economic hole that cancer put her and her husband into despite the fact that they were well insured.

The system is a mess on so many levels. Probably the first thing that should be done is to reform the election financing so that it would at least be harder to buy and pay for politicians and elections. But the media is bought and paid for too, by and large and inept and corrupt as well, and an illiterate under-educated public drinks whatever cool-aid they serve without bothering with that peculiar concept called thinking.

So anyway, depression is now topped with pissy rage. I think this is about as bleak as I've ever been in a post. I apologize. Obama hasn't met my hopes for him, but he has been trying in spite of a divide party of his own and an opposing party whose sole function is opposition and a public that thinks the world runs by magic.

Lucky for me, Nate fixed my computer. I lost some stuff, and I still have to reinstall things, but I can play games again so I think I'm going to just go crawl into an alternate reality where I can beat up the bad guys and where truth and justice eventually reign.

I'm disappointed in the President, but I think he's a good man and I think he has a good vision for the nation. He's not the kind of politican we've been used to, not willing to fit into anybody else's box. Not trying to please anybody, just trying to work around obstacles and move us forward in increments because there's too much obstruction afoot to do anything else. I just finished reading his Dreams from my Father auto biography. It's a beautiful book. I have always believed that words carry the energy and character of the writer. This is a good man and a profoundly honest one (even if he is a politician).

Anyway, sorry for the rant. (Not sorry enough not to push the publish button... a bit ashamed of my vitriol, but too much in it to not go ahead anyway.)

And there is always hope. Even in the bleakest winter, there is much beauty to be seen... 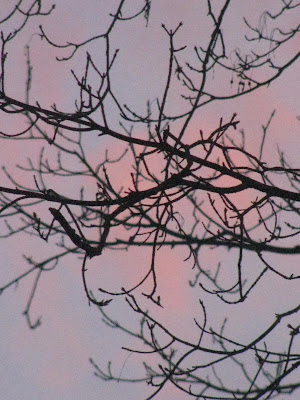 And the Angel and Tara Grace still make me smile... 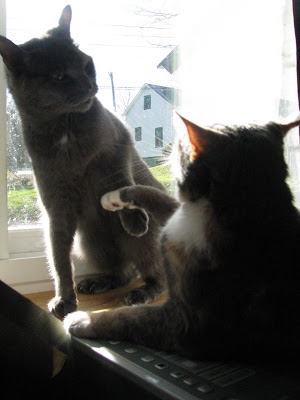 Today may be bleak, but tomorrow is another day....
And maybe your day is wonderful. I hope so.
Posted by Raven at 11:37 AM

It is all overwhelming at times, isn't it.

Your 2 feline friends look like they are shaking hands, but I can tell by the ears, they are about to wrestle for position...

Do not apologize. Your "rant" is spot on. Trouble is, yours is not the message that We the People wish to hear. I've stopped blogging precisely because We the People won't hear any messages that We don't wish to, and, frankly, I've just about given up on America. We're dead, and we deserve to be dead. For those not yet ready for seppuku, I recommend a crash course in Chinese. Our young people especially are going to need it.

Raven, I sicced Amoeba on you to cheer him up so he'd know he's not the only voice of reason crying in the wilderness. However, I doubt the compnay really cheered either of you significantly.

You hit the nail on the head when you state we are a nation that wants everything NOW!
People believed Obama would make the change but they didn't see that it wouldn't be coming immediately. Now they're disappointed and I think so is he. I heard him say the other night -you wonder if it's worth it. Let's hope he doesn't give up.

I'm sorry you're battling the winter doldrums...I think you are NOT alone!

I'll be in touch soon to arrange a delivery day for you!

We here in the UK are so very lucky and we don't even realise it. Our national health service is the target of much moaning and groaning about waiting times etc., but at least it's free so people don't have to be nearly dead before they see a doctor. I think president Obama has to be the best thing to come along in years and I really do hope he can make an impact. Your pictures were really nice too - especially your kitties. I won't say "cheer up" as it can be very aggravating to hear that when you're down but I do hope you will ayway.