Well, my heart isn't quite into posting but I'm foolishly listening to the hearings for Judge Sotomayor. The Republicans are having a great time mis-quoting or quoting President Obama out of context on the subject of empathy. (He stressed equally the importance of adherence to the rule of law.)

What's fascinating to me is that they don't seem to understand what empathy is or think that one capable of empathy is only capable of empathy for the side of an argument they are most partial to already. In fact empathy implies the opposite. The capacity for empathy means that you are capable of putting yourself into the shoes of parties on BOTH sides of an argument. Empathy actually allows one to listen to arguments from outside the narrow confines of one's inherent prejudices with an open heart and mind. It is very much the opposite of what Republicans construe it to be. Empathy isn't bigotry, nor does it incapacitate one's ability to reason and adhere to the precepts of right and wrong or the letter - and intent - of the law.

Then there's the whole nonsense about activist judges. The Supreme Court seems to me to be a relatively "activist" branch of our government in some respects. Over the course of history the Supreme Court has interpreted and re-interpreted our laws in ways that have changed the course of the nation, sometimes for good and sometimes for ill. While our law is a set of codes and guidelines, it is also a "living," evolving entity and one which is open to interpretation. That's why there IS a Supreme Court. Were this not so, racism would still be constitutional, women would not be able to vote and many societal evils would still be legal. I really have to stop watching CNN. It makes me cranky.

Guess that's all I've got in me. A little spurt of opining. Now I will scurry back to my cave and rest. Here are some photos of the woodchuck who visited yesterday for a while and posed quite nicely. 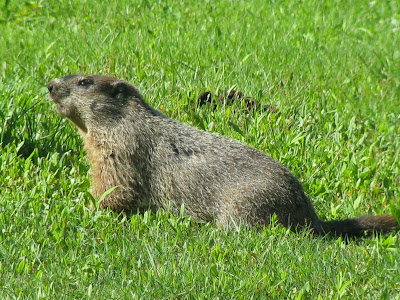 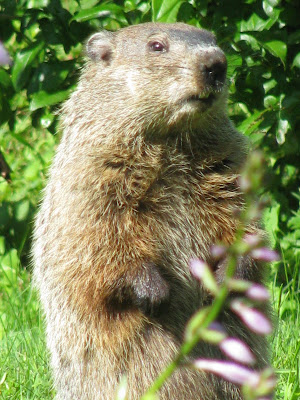 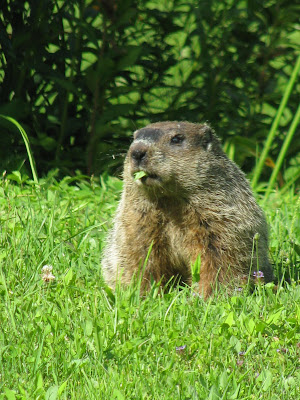 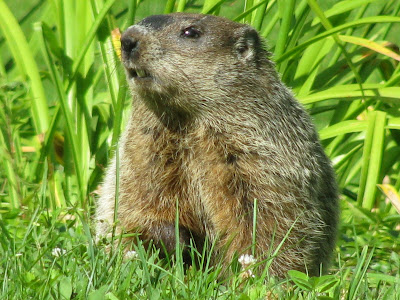 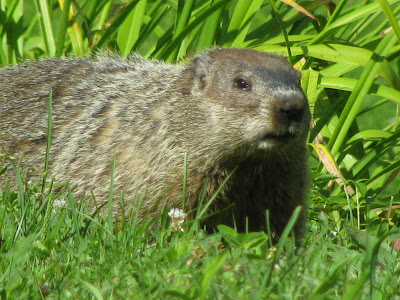 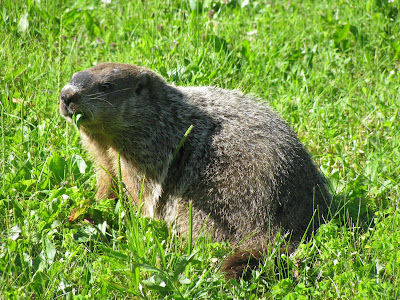 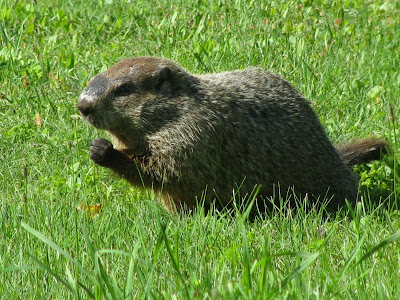 HAVE A GREAT AND EMPATHY-FILLED DAY!
Posted by Raven at 12:29 PM

Since politics leads to nothing good, shall I say I adore that groundhog...so glad you included this endorphin enhancing photo!
Sandi

I had to stop watching the hearing: I kept wanting to just up and scream "BUT..."

Those are delightful woodchuck photos! Thank you, Raven

I've never seen a real woodchuck. They are quite large, aren't they?
Can't watch the madness of the hearing. I would get too angry at those who just want to make trouble.

"The capacity for empathy means that you are capable of putting yourself into the shoes of parties on BOTH sides of an argument."

Excellent points all. Several commentators on the cable news networks have noted that the decision on the firefighters was the exact opposite of "activist." In that it fell squarely with existing law. I guess conservatives actually like "activist" judges, if it means changing laws they don't like.

Great pictures.
The truth is hat both sides don't want to see somebody with a philosophy different from theirs on the court. One can sugar coat it in all kinds of ways with all kinds of words but that's the truth.
It is the Democrats turn and the Republicans might as well acceptit. Not that the Democrats were any better when Bush made nominations.
It is a nasty game.

We got rid of cable, so I couldn't watch...probably a good thing!

I try to avoid making absolute statements, but sometimes the evidence suggests that they are the only type of statements that apply.

And so, I will make one. They mis-quote and quote out of context because it's all they have. They can't justify contrariness for contrariness' sake, and so they must manufacture some evidence to rally around. It's just all they have left.

I haven't watched. I was on the computer and saw a link where you could watch and I almost clicked but made myself say no. :)
Your woodchuck posed very well!
If he's going to keep hanging around you need to name him. ;)

travis has it right! that sums it up. my hope is that their tactic will actually continue and they will destroy themselves - and trust me, I'll empathize with that

thanks for a wonderful, clear explanation of empathy

Thank you for your wonderful exploration of empathy. I can't imagine how it would considered to be an undesirable quality.

I am fascinated by the concept of impartiality and to what extent it can exist in the human sphere. This issue goes to the very heart of the judicial process. Judge Sotomayor, I think has acknowledged the undeniable ways in which life experience shapes a person. A review of her career shows her to be an introspective and careful judge who thoroughly scrutinizes facts in order to counterbalance whatever preconceptions she may bring to the bench. In fact criticism has been leveled at her that she is overly deliberate in her process of deciding cases.

Judge Sotomayor has cited Justice Cardozo as her favorite justice. He wrote a book called The Nature of the Judicial Process, in which he introspectively examines what judging is. In essence, what are the preconceptions that I, with my particular background, have brought to the bench? And how can I lay my biases at the door once I have identified them?

One example of how Judge Sotamayor applied this principle is in Pappas v. Giuliani, one of her rare dissents in which she ruled in favor of a city employee even though he had been responding to solicitations for contributions via racist emails from his desk. She found his actions personally offensive but stood by the rule of the law in defending his right to retain his job.

She sums up her judicial philosophy as follows: “I do believe that life experiences are important to the process of judging. They help you to understand and listen, but that the law requires a result. And it will command you to the facts that are relevant to the disposition of the case.”

The woodchuck is adorable and indisputably partial to greens!

Hope all is well.

Just trying to make sense of my last comment. Really I think what I was trying to say is that life experience influences perspective. Thus, shouldn't we strive for diversity in the judicial branch that interprets the living body of law? Looks as though she will be confirmed!