Scenes from a Renovation

Of course, being me, I'm having all sorts of second thoughts. The new toilet seems huge in my tiny bathroom. The linoleum is way darker than its picture on the Armstrong site... Have I screwed up? Truth is it's already way better already than it was.

Fred, the guy doing most of the work - he did took out all the existing stuff with the minimal help of a plumber, laid the floor. Found some rotting boards under the tub, which he replaced and prepped the walls for the installation of the shower today. He's an amazingly hard worker. He did much of the work on the front ramp too. Today the shower goes in the rest of the way (I think) with a fold-up seat and hand rails. The sink, maybe tomorrow. Yippee! Now for pictures. 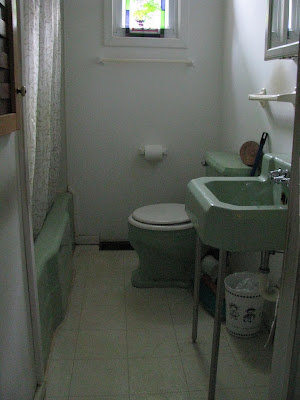 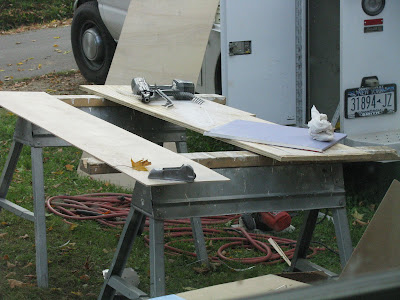 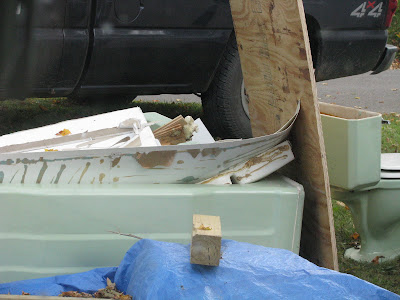 The new toilet (who posts about a toilet?). It seems a bit huge, but it's so much easier to sit and stand, and the saving in water is incredible. Really awesome. I just love flushing it. It's like a cool new toy. I really miss having a sink, though. It hadn't been delivered yet as of yesterday. Sigh. The linoleum is darker than it's pictures but it's growing on me. Oddly, I had envisioned the pattern running the other way. This is probably the better choice in such a narrow room because it probably makes it seem wider. (???) 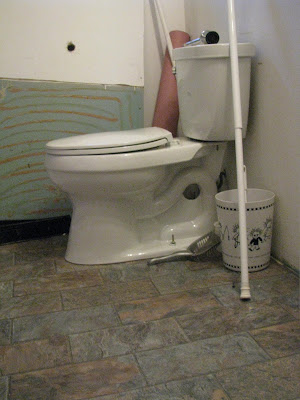 The walls of the shower prepped for the final installation. I forgot to take a picture of the base but it's not actually that interesting... except to Angel who found a bunch of things to play with. 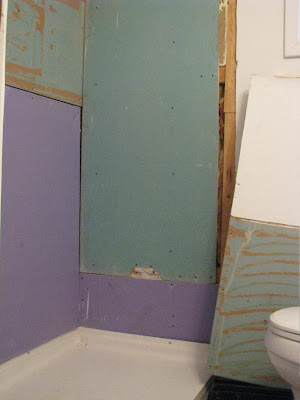 That's it for now. Truck just pulled in. My anxiety is really high today for some reason... even more than yesterday. Angel has been wailing from behind the bedroom door. She was really traumatized yesterday, so once the hammering starts, I think she'll be glad she's in there. And she is quiet already...
Posted by Raven at 8:45 AM

Ohhhh I really can't wait to see it complete! What is going in the extra space that the shower doesn't use? (where the tub was)

The whole thing is going to be a shower stall with a seat at the back and rails to pull myself up. I'm not sure exactly how it works. He's taking some pretty chunky blocks of wood in there this morning so maybe the walls will be thick.... I don't know... aaaahhh.....

This is just like watching some of my favorite shows on HGTV!
I think it's looking very nice!
Be sure to tell Fred a big thank you from us and that we appreciate him taking care of you so well.
No anxiety you hear - it's going to be great!!
Hope Angel has a good day.

Raven, even though you like and appreciate the work these folks are doing, they are still extra people in your space when you're used to being alone. Hang on, they will finish and you will have a great new house to enjoy!

I looked over the photos before I read what you'd written. I was really surprised at the pattern orientation on the bathroom floor, too, but you know, you may be right about it making the room seem wider. At any rate, I like it!

Quilly - it's true, I'm not used to having someone around, especially hanging out in my bathroom... or to having the cats locked up. And there's a lot of emotion for me in the enormity of the gift I'm being given... That and I'm not used to getting up at 7 am. He cut holes in the walls for hand grips, so I'm sure I'm getting painted now too. Yippee! I had told him he had to be a little less neat in his work...

Wow...it's coming along so nicely...and quickly, too! Good for you! Can't wait to see the whole thing!

Today was the 2nd day back at school...am more tired today than yesterday, even though I went to bed earlier last night and slept in a bit later this morning. Guess it's just catching up with me. Plan to watch Slumdog Millionaire and go to bed even earlier tonight!

More next time...again, congrats on a beautiful new bathroom!!!