Beaten by a Twelve-Year-Old 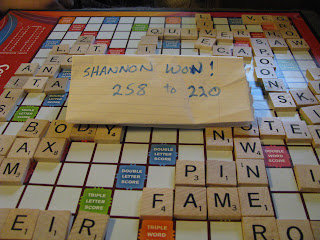 Shannon came by for a while yesterday and joined me in being frustrated by the browser problems I'm having.... so much so, that she suggested we play Scrabble. It was a close game most of the way and then.... then..... the little whippershapper went and beat me! It's the first time she's ever played a game where all the tiles got used up and she was just thrilled to beat and old fart like me. "You got beaten by a 12-year-old!" she rubbed in with glee. The word that did me in was three letters (see middle right of board): JAY for which she got 39 points. Anyway, she took these photos and I promised to announce her victory to the world, so. Shannon D. trounced me at Scrabble 258 points to 220 points. Brava, Shannon! Well done! Shannon took the photos too. 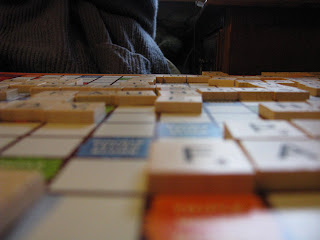 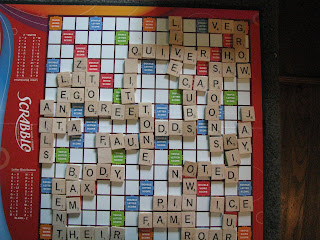 I'm still very frustrated by whatever is going on with my browsers. The computer isn't unusable, it's just annoying. Mozilla usually shows up once but then creates shadow browsers if I click it again which is upsetting and slows the computer down. These shadow browsers no longer go away when I run a clean-up program so I have to restart the computer or it runs really slowly. This means I'm using Internet Explorer. I don't like Internet Explorer. It seems very slow to me and it freezes all the time and it just generally makes me cranky. I did figure out one thing yesterday. I got rid of the stupid AOL "My Page" which I had never wanted in the first place and that has helped a bit. But it still keeps refusing to load things and it's so SLOW! Anyway.... I will try to visit people but I'm not a really good visitor even when things are working well, so...
I have photos for Ruby Tuesday but I may have to wait another week because all the rebooting makes me way crankier than anybody ought to be.
Have a great day!
Posted by Raven at 10:50 AM

How annoying. I mean the browser problem rather than being beaten by a 12-year-old at scrabble ;-)

My computer upgraded itself to Explorer 8 a couple of days ago and so far seems more pleased with that version than the previous one. Remains to be seen how long that lasts...

I can't remember the last time I played Scrabble - I so used to enjoy it!

I have a 12 year old so I understand your . . . admiration mixed with resignation :-) Re the computer, we've been running Chrome and love it. And my husband installed Clam-Win for viruses a few months back and it has caught a few before they could get ugly inside our machine. Hope this helps!

Oh those triple word scores!!! Combination of having the right letters and the savvy to pull it off. Bravo for Shannon. Sorry for your computer woes. I’m often flummoxed by their pesky quirks.

Congrats to Shannon! That's a win to be proud of, I know you had to work for it.

Raven, have you tried clearing your cache and defragmenting? I don't know if it will work, but it might be worth a try. Also, what virus program do you run? McAfee and Firefox have issues and I went through some trials with them that sound like yours. I run AVAST -- it is great virus protection and it is free.

I cannot wait until my boys are older enough to play Scrabble. One of my favorite games. Not one of Thomas', so I wait. :)

Ugh, I don't like using IE either and it is annoying when the browsers are uncooperative. I am having some problems with Blogger and Picasa and the combination of them, so I am equally frustrated. Maybe we should make a club.

Great game, I used to play with my folks when I lived at home - Sunday night Scrabble and popcorn!

I used to love scrabble when I was young.
She's only twelve - the win made her day - think of it that way! :)
I love the perspective she took when taking that first shot - good eye Shannon.

I hope your PC gets well soon...

odd combinations of issues depending on what I'm doing

SouthLakeMom mentioned Chrome - that's a pretty good option to use. The only thing I don't like about Chrome is the way it handles pop-ups. It doesn't always tell you that a pop-up has been blocked, or allow you to unblock the pop-up. I use Opera, which is another great browser. But I find that sometimes Opera doesn't let me do things like post messages on my friends' walls on Facebook. It seems that it's unlikely you'll find a browser with zero problems! What I do, is I run Opera for everything but I keep Firefox as a backup and if Opera misbehaves with a specific web page, then I open just that page with Firefox.
IE is a horribler browse generally and I try to steer clear of it!

I LOVE Scrabble - I can't wait until my daughter can read so we can play together!!

Congrats, Shannon for winning! I once beat my MIL and Grandmother-in-law with the word tuxedo; I used all my tiles! They don't remember, but I do - they are amazing word people!! They play a mean game!


I hope you figure out your browser problems soon, Raven. Netscape is still out there...