The Alphabet Backwards: "I" is for Impeachment and Idealism 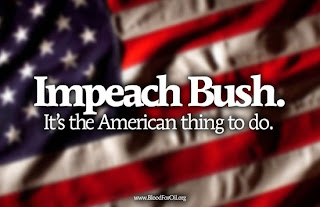 Author's Note: This is going to be a long rant today. Sorry. I haven't polished it up either. Sorry about that too. I just have to get this out of my system as best I can. If I try to get it perfect, it will never get posted. So, here goes...

Alphabet backwards day rears it’s ugly head once more and today we greet the letter “I,” a fine letter indeed that offers many wonderful words such as: imagination, invention insecurity, idealism, ideas, inspiration, ignorance, idleness, impressionism, impressive, indigo, islands, irony, idiocy, illness, ill will, igloos, ice caps, Iceland, Inuit peoples, illusion, Iraq, Iran, Ireland, Israel, Italy, International Court, impossibility, indignation, illiteracy, idolatry, improvement, …. I mean the list is impossibly rich. I could go on at tedious length about any number of these topics so WHY, you may be asking yourself another rant about – sorry everyone – impeachment. Why? Because it’s INCREDIBLY IMPORTANT!

I know that some of you are sick of hearing me on this subject, but I think it’s too important to let go of, so, those more practical, more right wing, more whatever than me can just skip over my latest treatise on why impeachment matters or you can argue with me about it. I'm ok with that. It's part of what makes life interesting. So here is a small fraction of the reasons why I think impeachment matters so much.

ecause these men – Bush and Cheney and their colleagues have committed multiple serious violations of our law. They didn’t have sex with an intern (at least not that we know about). What they have done is to repeatedly violate the laws and the SPIRIT of the laws of our nation. They have quite possibly committed acts which rise to the level of treason against the nation. If we don't try them, we will never know for sure.

Whether through intention or ignorance, they led us into an unnecessary war which has resulted in the deaths of thousands of American service persons and hundreds of thousands of Iraqis. In their zeal to engage us in this war, they ignored the UN and the rest of the world, consciously outed a CIA agent and then lied about it. Not one but two of their former press secretaries have written books which attest to this.

They have conducted this war with a lack of planning and skill that is shocking in the breadth of its failures, particularly since they rushed us into it with such enthusiasm. Because of their ineptitude and refusal to listen to any voices but their own, our military is being stretched to or beyond the capacity of the people serving to ultimately endure the physical, emotional and psychological stress. We are running out of people to wear out…and throw away once they return home. Patriotic talk is cheap. Actually caring for the members of our military isn’t and it seems as a nation we favor empty tears over true compassion and care.

There is considerable evidence of both incompetence and out and out graft in that part of the war in which has been sold to mercenaries. And there is again a shocking disregard for justice, law and ethics in the administration’s willingness to shield these mercenaries from prosecution for crimes committed… in our name and on our tab. These mercenary organizations have grown obscenely rich while American soldiers come home wounded to inadequate or unavailable medical and psychological treatment. And this after serving multiple tours of duty. This kind of betrayal of our young men and women seems to me to be a form of treason as well. The Bush administration accuses others of being unpatriotic, of not caring about our soldiers, while they themselves treat them like so much garbage.

And Mr. Bush and his colleague once again violated both the letter and spirit of the law by spying on American citizens. And there's the whole issue of abuses in and by the Justice Department. Remember Alberto Gonzales, the man with no memory?

Then there’s the integrity of the democratic process itself. There is good reason and substantial evidence to question the legitimacy of both elections. One reason, I think that Dennis Kucinich is particularly keen on impeachment – other than his fundamental integrity as a human being – is that there is significant evidence that the elections in , the state he serves, were tampered with.

These are not small things. They are not inconsequential things that should be gotten over because it’s uncomfortable to deal with them. I wonder what these men would have to do for our nation to rise from it’s torpor of indifference and do something. Would we rationalize even torture conducted in public view on the White House Lawn? What does this say about us?

Many of the same people who want to sit back and do nothing about the Bush administration will condemn roundly the acts of foreign leaders who have committed similar crimes. I find that puzzling… that these things apparently – in the minds of some – are only immoral when someone else does them, but when we betray law and decency, we must have had a good reason. Talk about rationalization.

Almost as disturbing as this very partial and fragmentary list of the Bush administration's crimes and failings is the troubling truth that politics and party seem to have taken precedence for most politicians over truth and justice. There is more than ample evidence of questionable behavior. More than one former member of the Bush administration has come out and said as much… or certainly enough to make it mandatory that a nation of law undertake serious investigation. But one of the reasons sited for not pursuing impeachment is that because the Democrats have no actual majority in the Senate, that impeachment is impossible because the vote would split across party lines and no matter how much evidence there is, Bush and Cheney could not be convicted. How sad to think that party matters more than truth and the honor, future and security of the nation. How disgraceful. How obscene.

I’m told by a number of people that Bush and Cheney can still be impeached after they leave office. Better late than never, I guess, but rather like performing surgery after the patient is dead because that way the surgeon no longer is at risk of being sued for malpractice.

Which brings me to the second “I” word I chose for today: Idealism. What has happened to idealism? Our idealism has always seemed to me to be the core of what being America/American means. Our ideals, our idealism was what made us special. We may have fallen short on many occasions, but we never let go of trying before. That’s another reason to impeach the Bush administration. They have rung the final death knell on our idealism. We will never be the same again.

I know not everyone agrees with me about this. This isn’t a researched essay with political and legal proofs. It's not polished or organized in the most logical fashion. It's a rant and it’s my heart and my frustration and my anger and my love of my country. I feel like a mother held back from going into the burning house where my child is sleeping, while the firemen outside argue about who started the fire and whether or not it’s safe to enter and do their job. They argue and negotiate and the child dies. The death of idealism is the death of hope. This is why so many are drawn to Mr. Obama. He is a reminder of the possibility of idealism. I hope that he can awaken the sleeping giant of our greater self. I hope it isn’t too late for my country to be saved. But idealism can't just be pie in the sky talk about tomorrow. If we are to recover our nation, we have to walk the talk of freedom and decency and not just say the words.

Just saying "I love my country," isn't patriotism. Unless we vote and unless we act to ensure that our government/nation lives the ideals of what our country stands for, that's just empty talk. It's no more patriotic to watch your country die a slow death from indifference than it is compassionate to see a bleeding stranger on the street and say "oh how sad, " as you walk by and let him die. From my perspective, that's what we're doing when we ignore the call to impeachment because it's inconvenient, not a guaranteed win or any of the other excuses given for not acting to uphold the law and spirit of our country. It makes me sad. It makes my cranky. It makes me rant out loud from time to time. Today is one of those days.


And that’s the alphabet backwards for today. Next week the letter H and hopefully something less intense and happier….
Posted by Raven at 12:20 PM

Their photos are spectacular, everything is beautiful and the colors wonderful, extraordinary picture of the sky blog, congratulations.

That isn't a rant. That's a well written document of patriotism.

Send it to Huffington Post or the NY Times. Send it to Kucinich (sp) just so he knows how many people support him.

You're preaching to the choir, Sister! Wearing a flag pin and being a rabid war monger does not make a person an American.

I'm glad you speak your mind Raven!
Good for you!

I do not really understand the intricacies of politics but this post reminded me of a humble little post of mine which calls for the need of peace in the world rather than war:

Just hang on until next January 20th.

Thank goodness we can speak our minds freely. However, you are probably on some government watch list now. Just kidding..well..maybe not...

Absolutely agree with you, Raven.

Although I doubt that Congress will act on Impeachment, with such a short time left, there is a developing plan to try to bring Bush and Cheney to trial for war crimes. "A conference to plan the prosecution of President Bush and other high administration officials for war crimes will be held September 13-14 at the Massachusetts School of Law at Andover." See http://www.afterdowningstreet.org/node/34171 for more information.

Only "Considerable evidence?" Huh? I think the evidence is overwhelming about the laws broken, the graft, incompetency, etc., etc., etc. Great post, Raven.