Let me say that I hate cleaning and I have great shame and guilt about that, particularly since I am the child of a cleanliness fanatic. I was never very good at cleaning even when I was more agile. Now I really stink at it, so the idea of me featuring a vacuum cleaner is kind of Twilight Zonish. You can probably tell that I got more pleasure out of taking pictures of this thing than using it, especially since you can see that it's sitting on top of the dirt on my hideous kitchen floor being photographed rather than being used. Sigh. My mother is sobbing in Heaven and I am no doubt in big trouble. 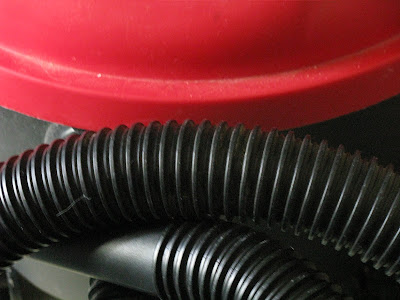 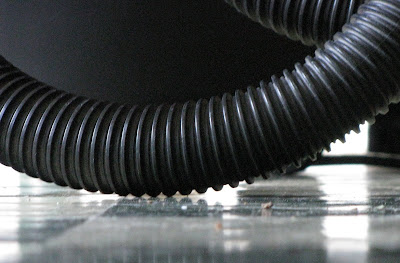 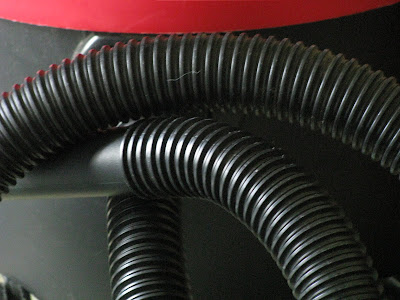 Trouble Part 2: Angel, aka Trouble on Four Legs, aka The Tiny Terrorist

I've posted these pictures before. They were three of the first photos I took when I got my new camera back in March, so I didn't want to share them as a separate entry. They are pieces of Angel kitty: the black spots on her nose and the black triangle center of her eye... and the face that goes with them, just because it's so darned cute ... Don't be misled by the innocent look on that face though. She is one of the most creative mischief inventors in all of kittydom and each time I solve one crime wave, she either thinks of something new or re-invents the old one. She also gives good hugs, though, which is how she gets away with it, I guess. 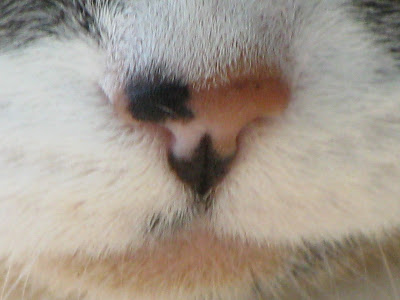 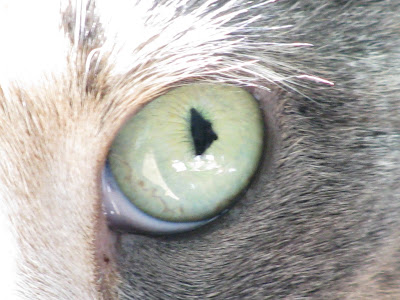 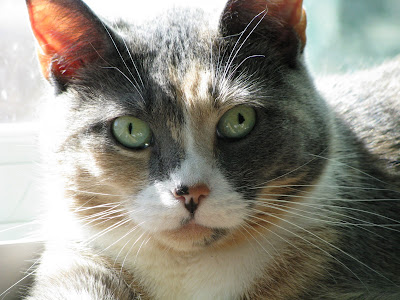 Cane Corso Mastiff
Crow on the Wire
My Black Cane
Shop Vac and Angel Parts
Posted by Raven at 12:01 AM

How very artsy with the vacumn! Great job.
I don't think I've seen these of Angel but they are very good as well!
I love her cute little face. My cat Heidi is Black and I tried to get her today and she will have nothing to do with it. I'm envious Angel lets you do this.

You're finding black everywhere! Love the kitty nose and eye. And I like the third of the vacuum series. Keep up the good work. (The picture taking, not the housework!)

I wish my floor was so clean. I saw one crumb and a little dust. Your cat is beautiful and I loved the pictures of her.

there's that old joke! I think Roseanne said it "no one ever said they dream of their headstone saying - she kept a clean house"

your photos are - as always - beautiful

I am also a member of the Sisterhood of the Untidy.

Cute! I love cats in all shapes and colours!

What a creative idea! The vacuum hose has a wonderfully architectural look to it. And somebody wise once said, "Show me a perfectly clean house and I'll show you a wasted life."

Thanks for your kind comment and for welcoming me to the project!
Vicki

Two great PB choices. Always love close-ups of anything...lets you see things in a different way. Now, as for kitty...she's ADORABLE. How interesting that her one pupil is triangulated.

i share your dislike for vacuuming.
great shots, though, and the kitty looks adorable.

I love the vacuum shots! I'm not a very good cleaner either... my mom is always nagging me to get my room cleaned.

your cat is exceptionally handsome.

Vacuum cleaners ah......well I had a super one that I thought was new until I discovered it was 11 years old and would have to be replaced.
It was an Electrolux and a new one was $600. So I bought something for $19.99 instead.
It is a piece of...
In short, it is unsatisfactory.
I now use a broom.
I want my old vacuum back.
It was excellent.
all best

Raven, you have such a great sense of humor! I love what you write with your photos. :)

Nice work on the vac shots. I really like the lighting, and the dirt on the floor is a nice ironic touch. ;)

I have enjoyed your project black shots. Your cat is so "peaceful" looking. And the vacuum shots are very creative.

Clean is SO overrated! I love the shots of the shop vac though! It's amazing how "artsy" such mundane everyday items can be!

Who knew a vacuum cleaner could be so much fun! :)

And I love the meow nose.