Poem of the Week: Ode to a Bat 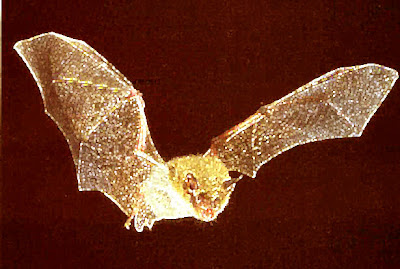 I picked this week's poem because I happened to catch a conversation on Charlie Rose the other night about the troubling and potential environmental crisis involving huge numbers of bats in Vermont and upstate New York (not far from me, actually) dying of something they are calling "white nose syndrome," because many of the dead bats they are finding have a white fungus on their noses. Scientists have yet to discover the cause. This could have a serious impact on the environment because bats do a great deal to control the insect population. This is nice for those of us who don't like mosquitoes and flies, but beyond that, it's important for farmers and crops.

Anyway, thinking of bats took me back to my time working in the mammalogy department of the American Museum of Natural History. Except that it didn't pay enough for me to live on, it was a pretty cool job. Working in the big musty rooms beyond the visiting areas felt special. The museum is in an exciting part of the city - near Central Park - and in those days I'd walk either all or half way from 18th and 1st where I lived to Central Park west. It was good for my health. My office in the museum... I was a mere secretary - with three bosses - but I had my own huge office which I shared with the dead bodies of hundred of bats and rats from Indonesia. Because I worked fast, was easily bored, and could do it, I ended up editing manuscripts and (this was so cool) numbering and cataloging specimens. This entailed writing 8 to 10 digit numbers onto bones, some of them extremely small. It was interesting in a strange way and quite a challenge at times to fit all those numbers onto those tiny little bones.

But back to bats. One of my three bosses was the the late Karl Koopman who was at the time the world's foremost expert on bats. He loved bats way more than people. If some poor soul called in asking for help because his/her house was infested with breeding bats, Koopman told them they should learn to live with it or move. He sang the generic names of bats to the tunes of Gilbert and Sullivan songs. He even looked kind of like a bat. I didn't really know him very well, but he did change my peceptions about bats and I wrote this poem for him.


ODE TO A BAT
dedicated to Karl Koopman 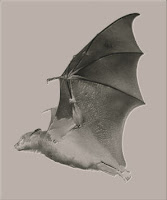 Winging softly through the forest

On your wings of silent leather

Unadorned by fleece or feather

Doing no one any harm

Yet driven off from hearth and farm

You who have since ancient times

Been the butt of unkind rhymes

You, who unlike men and birds

Hark the sound of your own words

You are not that nasty creature

No! Gently do you twitch your ear

And listening for an echoed sound

Eat bugs and fruits which do abound

Then flutter home to cave or tree

And hang there, resting quietly

We're sorry for the fear-filled lies

That haunt your passage through the skies

Our stories will become less ghoulish

Will not be scorned in every town

Nor virgins wear a cross at night

To save them from your dreadful bite

And man, with realistic eye

Will watch untrembling when you fly

Nor will he pause this time to curse,

But knowing nature is diverse

He'll smile to think in yesteryear

Or thought you worked for evil ends

You kindly bats who are our friends.


As long as we are on a semi ecological theme - I wanted to post a reminder that on March 29th there's something going on called the "Earth Hour." The idea is for people all over the world to conserve one hour's worth of electricity by turning their lights off for an hour at 8:00 pm on the 29th. For more coherent information on the subject check out Earthhour.org.
Posted by Raven at 12:02 AM

Okay, that is the SECOND time I have opened your blog to find myself startled by a creature I am not too fond of-however, I feel enlightened (not less terrified!) about bats and I imagine it would be great fun to work in the museum. I have visited several times and cannot wait to take the boys. (they will probably hit the bat or spider displays first, right?)
I particularly like how Koopman made bat songs using Gilbert and Sullivan-clever, plus great music!

The poem was a lot of fun to read and I learned a lot! While I have many fears to work on, I do not wish harm to bats as I know they do a world of good. Some people say the same about spiders, but I have not bought into that one yet.

Hi Linda... Sorry. Didn't mean to scare you. I think it's easier to come to terms with bats because they are less likely to show up in the house or the bathtub than spiders. I have an uneasy truce with spiders.

I also got to look at lots of dead bats and touch them... (yuck...) but they were surprisingly furry and soft. I also have a soft spot for anything that eats bugs... like mosquitoes and the like. I bet they eat spiders too... another (though I may have just made it up) virtue...

Koopman was very weird, but his office was directly opposite mine and I did enjoy his Gilbert and Sullivan.

Girl you know ya got mad poetry chops when you can write something this beautiful about a creature most people fear and loathe.

I have a different view of them also. When we camped out at Lake Apache in Arizona we used to watch the bats at night. I would get out a "million candlepower" search light from our boat and we spent many happy nights watching their amazing air acrobatics as they took flying insects out of the air.

I love the term "mad poetry chops"! Richard is so cool ;)

I can't believe you walked from 18th and 1st all the way to the museum. Wow!

We used to rent an old beaten up garage in Brooklyn. There were bats and I loved them.

dianne - you would be even more astonished about my walks if you knew me now since across a room is something of an accomplishment. Not sure how I'd feel about bats in my garage, though someone said I might have them on my back porch. I think they are fascinating, though.

Thanks for sharing the poem and the reminder about earth hour.

I am way behind in my blog reading :)