Still Crazy after All These Years 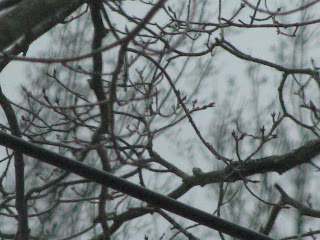 Oh, my... it is another gray, gray day here in Hancock, New York. Even though most of the snow is melted, what's left of the grass even looks gray to me or gray with a tinge of yellow. I don't why winter feels so horribly long this year but it does.

I've been trying to do the Heads or Tails Tuesday exercises - a place in your house - but somehow it was taking me to a dark place instead of a happy one. Don't get me wrong. I love my house. It's a sweet house and a miracle to me that I actually have a house of my own (well me and the bank are sharing it). For some reason the whole question got me wandering in the past. It's been a long journey to this house. Thirty-three years in my New York apartment ended by illness and the letting go of almost everything I owned. Eight years and six moves later I am settled in for life. There has been a lot of loss along the way - but also a lot of growth and gain. I want to write about it and I also don't. Mostly I just want to sulk, I guess.

And now I have figured out what's really going on. I'm mad at someone. I have a REALLY, REALLY, REALLY hard time being angry with people. As my therapist pointed out to me just yesterday, I turn it inward. I make myself wrong for feeling hurt. In this case someone didn't do something, didn't acknowledge a gift I gave them. Intellectually I know that it's nobody owes me love or appreciation for something I've done, but it hurt my feelings. I then turn that into something that I'm doing wrong. I seem unable to stop myself from this craziness. It goes back to childhood programming. My malevolent (really, no exaggeration here) brother would do some cruel thing that left me angry or crying and my mother would scold me for being upset, explain to me that he was tired or tell me that it was my imagination or... any number of things. So when I get angry or my feelings get hurt it immediately warps into "whats wrong with me." The bigger the hurt, the bigger the self punishment. This was a big hurt so my self-punishment must also be severe. It's not that I do this consciously. It's a reflex. My therapist on the phone yesterday, said over and over that I was turning my anger back on myself. I heard the words but I didn't hear what he was saying. I just got it now, writing this paragraph.

I am hurt and angry and I must be punished. I have no right to those feelings. They are selfish. Something deep inside me thinks (feels?) that my pain - even unexpressed - will harm the person whose action/inaction initiated it. A normal person would have said "caused" it there, but I can't do that because even though this person has been inconsiderate, I can't get around the idea that he had no obligation to receive or like his gift so he didn't "cause" anything. It's all in my head, it's all my fault. On some esoteric level, this is probably true, but it's a typical misuse of some of the new age philosophies. I remember "friends" back in the 70s who had hurt my feelings and when I told them that, they explained to me that this was my problem that because we are all "responsible for our own feelings." It's a little bit like telling the person who's foot you stepped on, that they shouldn't have put it in your path.

I've never gotten why someone can't be sorry that they've hurt your feelings without being to blame for it. But of course we live in a society that is big on blame. As a society we don't deal well with anger. I have a theory about that and it's connected to that whole concept of blame. I think it's because we've been taught that anger is a BAD feeling instead of just a human feeling. Well since it's bad, when we feel it, by implication, WE are bad. If we don't want to add being bad to being angry, then someone else has to be responsible for the feelings. They did it to us - infused this uncharacteristic badness into us and we (well I) get stuck there. Because of course the poor sap who inflicted - innocently or with malice - these nasty feelings on us doesn't want responsiblity for them either. The thing is that there isn't anything wrong (PLEASE can I hear this down in the secret depths of my wounded psyche) with being angry. It's a feeling. Like happiness. Only with anger, instead of letting it move through us we get stuck in it because we are trying so hard to not feel it. It's crazy.

And alas, even though I know and understand a lot about how this works. I still get stuck in what is one of the areas of my personal emotional quicksand. I'll get out of it eventually.

My thanks to anyone generous or unwary enough to have come across these words and read them. It's a gift you give and it is much appreciated. I sure hope the sun comes out tomorrow - both my inner "sun" and the one outside. I am really over winter and pining for some sign of Spring.
Posted by Raven at 1:47 PM

OK darling, I know from where you are speaking. There is this guy back here in Iowa that I wanted to have think of me as his (surrogate) father. Over the past year I have been hurt by him more than I have ever been hurt by anyone. And, like you I blamed myself...because I am a "bad" person. I am working through it and have come to the conclusion that he is the one who is all f*&^ked up. I have a lot of people tell me that they think there is something wrong with him and when I see him I can see that. It doesn't help that his actions still hurt but I am not letting ME take the blame anymore. It is his problem and deep down I don't think he likes himself very much. So don't take the blame yourself. You are a child of the universe and you have a right to be here and NO ONE had the right to harm you. The things they do will go back on them and you will be the stronger one. Hang in there Spring is coming. I promise. j

I'm sorry about your feelings being hurt. I'm sorry your kindness wasn't acknowledge. This person is oblivious to what he's missing out on. You're an awesome person...kind, thoughtful, loving...and it's his deeply profound loss!

Spring is coming...I just know it! Hang in there!

Nice to know I'm not alone (well not nice that you are hurting, but that others understand). The truth is in this case nobody really did harm me, just didn't (to my knowledge) receive what I gave and I took it rather hard. The hurt came from my nephew who never acknowledged the column/poem I wrote for him last week. We used to be very close and somehow I have lost that closeness and it hurts. I want only happiness for him. I just wish he loved me more than it feels like he does. And now I have spilled the whole truth.

wow, i totally get this! i am sorry your nephew didn't acknowledge your effort...
i find it hard to get past things, as we chatted about earlier, the raging inside.
good insights...
and good thoughts for you!!