The Alphabet Backwards: N is for Nationalism 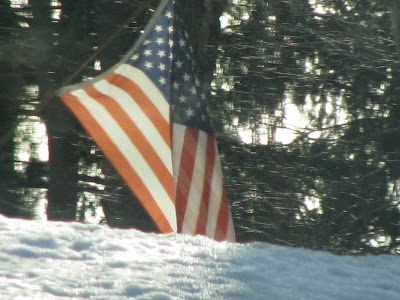 Well, on Memorial Day, it seemed to me like a good time to reflect on nationalism. I love the United States, which happens to be my country. I think we're a wonderful hodge-podge of creativity, generosity, greed, genius, stupidity.... as people we are both the best and worst of what it means to be human. As a nation, we are richly blessed with natural wealth and natural beauty. The range of this country's geographical wonders is astonishing and glorious. I love my country. I love the principles on which it was founded, even if it hasn't always lived up to them. Proud to be an Amuricin and all that. But...

Nationalism is sometimes a two-edged sword. Our current leadership (using that term loosely indeed) has used nationalism and patriotism to commit crimes - "we have to sack the Constitution in order to protect it." (Huh?) They have used nationalism to justify invading a nation which did not attack us and had no intention of doing so. Even if Iraq had been thinking about it, had been wanting to attack us... the road of pre-emption is the road to Hell. We should have known that before (some of us did, she said a bit crankily). Our own and others' history should have told us that it never works. There may once in a while be a kind of success in the short run, but seldom if ever in the long term. Except for the few brain-dead die-hards like the administration, McCain (who does not seem to be getting any wiser with age) and Republicans too proud to admit the error their ways, we certainly know it now. Still these old boys chant the old God and country and "saving our way of life" mantra for us, while they hack away at our values, savage our economy, and destroy the lives and spirits of the young people who joined our military, either for love of country or in hopes of bettering themselves.

And Calling what our young men and women are engaged in a "war" seems like a betrayal to me. It was an invasion. We are occupiers. (Actually, I think we don't know what we are, which must be another form of nightmare for the young people patrolling angry streets so far from home.)

It seems odd to me that the people who speak loudest about so-called "Christian values," have no trouble waging war on others. I guess they didn't ask the "What Would Jesus Do" question on that one. I think Jesus was partial to "turning the other cheek," and "do unto others."

It seems odd to me that in the name of love of country, we spend billions to kill and die and destroy, while we begrudge medical care, housing, education at home. Some even begrudge medical treatment and education to the soldiers who want at least that small return on their suffering.

It is sad to me that the land of the free, the great melting-pot nation who used to open her arms in welcome (at least in theory) to other nations, now simmers with hate and fear of others. I don't advocate stupidity. It is possible to be open and wise at the same time.

I love my country. That doesn't mean that anything goes. I love peace and quiet too. Doesn't mean I have a right to shoot the neighbor's dog when he barks incessantly. Any more than he has a right to shoot me or burn my house down because my spirituality may express itself differently than his.... or even my patriotism.

Love of country - nationalism - is a fine thing. But the kind of blind love that looks the other way at wrong-doing and that justifies anything in the name of pride or loyalty, doesn't seem like love to me at all. Because we love our children, we teach them right from wrong and we let them know that wrong behavior carries consequences. True love isn't always comfortable, it isn't always "nice." True love doesn't watch the lover go off a cliff while muttering starry-eyed nothings. True love leaps into action to save the beloved's life. True love says, "Wait! You're wrong."

At the present moment in history, I'm ashamed of my country's actions, repulsed and embarrassed by the Bush administration, disappointed and angered with a Congress that seems to lack courage and integrity. I'll never stop loving my country, but right now, at this moment in time, my heart is breaking for her.

Today on Memorial Day (and not just today) - I mourn for those young men and women who have died loving their/my country in both just and foolish wars. I grieve for those families whose sons, daughters, husbands, wives, cousins, uncles, aunts will never return to them...

I hope that one day soon instead of waging war, we will start waging peace. I think we have a better chance of succeeding that way and of creating a better world for everyone. Peace.

If you have the time, I hope you'll take a few minutes (about 15 actually, I think) to listen to the Bill Moyer's video clips I posted on Saturday.
Posted by Raven at 10:51 AM

I just heard an interview on NPR Radio with the last living soldier from World War I. At 107, he is very interesting! lol!!!

I just found your website and agree with everything you said. I love your 10 word challenge but probably won't join because I have a hard time putting a simple sentence together. But I'll enjoy reading the others that participate. Hope you have a good week.
Judy

jeni - thanks. I do go into preacher mode when I rant, don't I?

Michael - 107? Wow! You almost have to be interesting when you have lived that long and seen the world change so much.

grand life - thanks. Something about the wordzzle exercise helps break down creative blocks. Join us just for fun. It's not a competition, just a fun creativity tweaker. Nice to meet you.

This is RIGHT ON! I agree 100% with what you have said here. Much evil is currently being done in our country under the cover of nationalism. People need to THINK about what leaders tell them, not just accept whatever they are told.

Hi Joyce... it's so good to hear others who feel the same way as I do. I know there are lots of us out there.