The Alphabet Backwards: An Assortment of "U's" 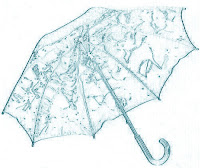 Well, of course the obvious word for U is umbrella, but since I never leave the house, umbrellas are kind of meaningless to me. Truth is, even when I was out in the big world, I didn't much care for umbrellas. They seem like more trouble than they are worth. I tended to lose them and when I did use them, they either blew inside out or didn't seem to keep me very dry. I'd just as soon get wet. So that takes care of umbrellas.

Then I though about ubiquitous, but really other than the saying that it's a cool sounding word which means "existing everywhere at the same time," there isn't much to say. It really is a great word, though. Had to mention it.

Next we have upset. I have a fair amount to say about this one. I have been very upset for the past few days. Last Thursday, I got a thing in the mail from my bank saying I bounced a check - guess it didn't bounce, it just "reverberated," but the bank gets to punish me $30 worth. My SSD money just gets me through the month and I am - well I THOUGHT I was - very careful about being sure my checks are covered. I can't figure out what I did wrong and that alone freaks me out. My mind being the creative little stinker that it is, has created a variety of scenarios of doom and destruction. These range from identity theft, my SSD has been taken away and nobody told me, I'm going to lose my house.... Oh, my mind goes on and on in ever deeping and crazier circles. I know that it's all insane. I reason with myself. I remind myself that everyting is correctable. I remind myself that people make mistakes. Do I listen? Sort of. Sometimes. So I'm already freaked out and on Saturday I get ANOTHER letter from the bank. Saying something about $116 and telling me that they are taking ANOTHER $30. Now I'm convinced that my identity has been stolen and/or that SSD is punishing me for something. I see myself homeless. I even went to - my imagination is a wonder - the idea that maybe I'd been reported dead. Where that came from is a mystery. It's the way my mind works when it is at it's most upset and dysfunctional. Mercifully my friends came over yesterday and as I talked through the two letters from the bank, it seems - you would not believe how badly these letters are done - that both refer to the same check. It's still unclear (another nice "u" word) whether they are going to charge me $30 twice, but at least it seems that only one check bounced. Only. Ugh. I'm not agoraphobic for nothing. I'm still trying to work up my courage to call the bank and see if I can clarify what happened. I did call to check my balance in between the two letters from the bank and my disability money was there and enough money that I sent out payment for my bills. Of course, I am still in a panic that everything is going to bounce and that my I'm never going to recover. Agh. It is so annoying being me some days.

This is all more stressful because I applied for an Amazon.com Visa card a while back (to get that $30 discount). They eventually approved me since despite having no money, I have great credit. I kind of forgot all about it and then I got a call - at about the same time the overdraft letter came - from some woman in India or Pakistan saying that the credit card kept being returned to them and that it was being sent to an address in Philadelphia or something like that. That kind of freaked me out too. That panicky part of me that doesn't cope with things still hasn't called Amazon.com, though I've checked the site to make sure nothing has been charged that I didn't buy and to delete all my financial information. The credit card, which was supposed to be sent to my correct address still hasn't arrived.

Urgent is another good "u" word. You'd think that given my hysteria about the above, the urgency of the need for coping with it, that I would have been on the phone to the bank first thing this morning, that I would have contacted Amazon.com last week. This is where my panic disorder really makes me crazy - or proves that I'm really crazy. I keep thinking about it, but I keep not acting, as though maybe if I sit really still and don't move, it will all go away. I hate this quality in myself. Panic may spur some people to action. It paralyzes me. In the old days, when I still lived in New York, when I still tried to leave my house, a huge aspect of my panic was that I became literally almost paralyzed. My muscles would get so tight that I could barely move, my back would be agonzingly painful. My legs would feel like jello and move like stone. My chest would constrict so badly that I could hardly breathe. And people wonder why I don't like going out.

Anyway, I'm hoping that by putting this out there, I will force myself to act. In reality, I think everything is fine and this is one of those convergences of stupid things that are either random events or little progress tests from the universe to see if I've really got the positive thinking thing down. I'm guessing that I'm not getting a very high grade. I might pass, but there is no A plus showing up on this crisis report card.

Well, I guess I could have titled today's post "True Confessions Under the Letter U."

Maybe I should end with something more upbeat - hah! another U word... they are everywhere! But I'll go with ukelele and a haiku

ukele songs
transport me to Hawaiian shores
a dream vacation

erved (another U!) by airing my insanity, that I almost forgot to mention Autism Awareness month. The following blogs and posts offer an opportunity to put a human face and heart on something which for most of us is just something we have heard about but don't really understand.

These are the Days
Forks Off the Moment - We are All Unique
Mother of Shrek
Full Soul Ahead
Down River Drivel
Look Me In The Eye
Posted by Raven at 1:33 PM

LOL! Thanks! That was good.

A little update. I posted this and went to get my mail. It included the missing Visa card. Then I worked up my courage to call the bank. They add another charge every 5 days. I told them my sad story and they agreed to waive the second penalty. I'm not going to die or lose my house and my identity has NOT been stolen. Whew! I still don't know how I bounced that check, but I'm just grateful that I can put it behind me... also got a pin number so I can check my account online now. Life is improved. I repeat. Whew!

Glad things worked out. And I love the poem at the end. Hawaii sounds nice to me!

Thanks... Hawaii is one of those life dreams that I never manifested. I would love to go there. Maybe own a little house right on the beach... at least there are some signs of Spring here in the chilly East.

I didn't realize that you are agoraphobic. I can relate on some level. I have Panic Disorder, although I've not had a really bad attack since my divorce 14 years ago. Hehehe, go figure. Seriously, it's truly amazing what stress can do to a person. And scary. I hope you get outside your home one day and discover that you are not longer afraid to leave it. There are many wonders to behold outside your door!

Hi willthink4wine.... for me one aspect of my panic, at least, was directly connected to my "demon brother" as I like to think of him. My agoraphobia is less about panic now than about my physical disability. When I win PCH I will hire someone to drive me around in the big world... maybe... Thank you for your kind wishes. I'm glad tha you are doing better.

Im not an umbrella person!

I am also glad you are doing better.

I was with you in your worries the whole way--financial snafus like that send me straight to Funkytown. I remember reading somewhere that a vast majority of women in a stress study listed these as their top two fears: 1) Harm to loved ones & 2) financial crisis/homelessness.

What a relief that it turned out well, Raven.

I love umbrellas when I see them in action...especially little kids on their way to school b/c you just see the colorful bubble & legs...but I don't use them, they just don't make sense to me.

Thanks Casdok, me too.

jo - thanks... I think I've read the same statistics and they make sense to me. What amazes me is how miserable I made myself for six days and then it all went away in about 20 minutes time. Crazy. I agree with you about umbrellas. I enjoy them on other people and especially kids, I just don't find them very useful.