The Alphabet Backwards: Taxes, Terrific and Thank You

There are so many words that start with T and many "big" themes - time, terrorism, theology - that I wanted to write about. But somehow, it isn't in my heart to do that today. There's so much I have to say about each of those subjects - or at least I think I have something to say - but when I sat down at the keyboard to tackle them, my brain took off for the parts unknown. Perhaps Aruba or Jamaica. I don't know. Not here anyway. Nothing was coming out of my head and I couldn't even force it. I started thinking. Well, "I just won't post today," but for someone like me, skipping a day is a slippery slope and I really don't want to start down it. So I have been brooding and fuming and worrying about what to do and what's wrong with me and then suddenly I thought. Ok. It's April 14th. Taxes. How could I have missed something that obvious?

So here are a few not overly coherent thoughts on the subject of taxes. I've left this post for too late in the day and my brain is just not cooperating with me at all today, even though it has finally agreed to a topic. Maybe it's Spring fever. If today was an "r" day, I could post the amazing pictures I took of my favorite robin this morning. He came nice and close to the house and I got some awesome pictures... But I'm stuck with "t" and an uncooperative mind, so here's the best I can come up with....

Here's my heretical statement. I think taxes are good.

I admit that I don't like paying taxes any more than anybody else does. Well, that's not true. I don't like letting go of money because it's pretty scare, but I think taxes are really quite a fine and worthwhile thing and it drives me crazy that we elect nincompoops like George W. Bush in part because of promises like "no new taxes." I just don't understand why Americans react to the phrases "lower taxes" and "no new taxes" like Pavlov's dogs salivating at the sound of a bell. The benefit to be gained from those phrases is just as much an illusion as the empty bowls Pavlov's dogs salivated over. We have been programmed to react to the idea of taxes like they are some kind of punishment or a penalty we pay. But taxes are important. They are our contribution to keeping aspects of society going. Roads need to be paved, our social security system needs to be maintained, trains and ports need to be kept running... and our schools need to be nurtured and supported. Not doing those things in a timely way costs us in the long run.

I'm not saying our system is perfect. (I think it's awful and in drastic need of repair.) Does our system need to be more fair? Absolutely. The middle class and the poor are carrying an absurd proportion of the burden while rich people are benefited with absurd breaks and excuses for not paying their fair share into the system. It's absolutely crazy.

What's crazy too, is that we all jump up and down with joy at the pseudo tax breaks and rebates, that are really sleight of hand or flat out lies. Besides the fact that the kinds of "breaks" people like Bush offer don't amount to enough to buy more than a few bags of groceries, they are also really illusions, because services have to be paid for somehow. So the cost of these "breaks" just trickles down to our State and local governments. We pay for them either in higher taxes there or in cut-backs that harm society as a whole and that ultimately cost us more when neglect catches up to us. Look at our school systems. Look at our neglected rotting infrastructure. That's what our tax breaks have bought us. Bush's big gala "tax rebate" when he first took office still makes me cranky. They spent billions on publicity and paper work. I got some absurdly miniscule amount of money from that expense and - adding insult to injury - it was TAXABLE the next year. Grrr.

I think the old "penny wise, pound foolish" adage applies to our view of taxes. Being cheap doesn't always save you money. I admit that it's relatively easy these days for me to be benign on the subject of taxes. My disability stipend is so small that I don't have to pay anything. But I have never resented paying taxes the way most people seem to. I never made much money, so I can't say I was delerious to see those dollars go. I can't say I always approve of how the government spends my tax dollars. I wish they would put more into helping the poor than they do into dropping bombs and planning interstellar spy networks. Still, we all benefit from good roads, from well educated children, from sewer and water systems that are well maintained. Those things have to be paid for. We can pay for them now with a few more dollars out of our pay checks or we can pay for them later with collapsing bridges, schools with not enough books and no music or art programs, and other things that cost us in more than just dollars and cents.

Anyway, as you write your check to the IRS or wait for your rebate, maybe think about shifting your attitude about taxation. Next time some politician tries to enchant you with the promise of lower taxes, stop and think about what that means, what it really means. Then vote for someone who promises FAIRER taxes. Vote for someone who promises to use taxes for the public good. And be grateful that you have enough money that you OWE taxes. Be grateful that you live in a magnificent - flawed, deeply troubled at present - but still magnificent country.

Well, I'm not so happy with how I've written this, but I'm really excited with my robin pictures. I think they are TERRIFIC ( that's a "t" word) and I'm excited about them, so I'm going to share one. 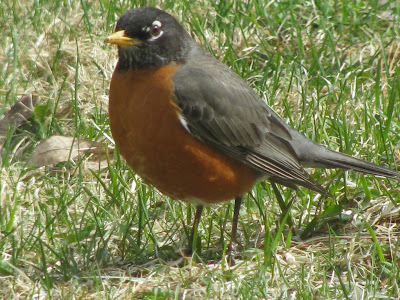 Happy Monday! Happy Tax Day tomorrow. Thank God/Goodness we are such a rich and blessed nation. Thank you for abundance and beauty in all it's forms. Which just reminded me that Thank you is another "t" word. Thank you to all of you who read and respond to my posts. You are TERRIFIC too!

I hope you will all take a minute to remember that this is Autism Awareness Month. The following blogs and posts offer an opportunity to put a human face and heart on something which for most of us is just something we have heard about but don't really understand.
These are the Days
Forks Off the Moment - We are All Unique
Mother of Shrek
Full Soul Ahead
Down River Drivel
Look Me In The Eye

Daring, talking about taxes that is. I also think they are necessary, just not the particular way they have alloted the burden these days. To hear a learned young man expound on the middle class, wealth and taxes - go herehttp://middleclassamerican.wordpress.com/middle-class-history/

Hi Richard, I'll check out the link tomorrow when my brain is functioning again and will reply to your email as well.

also feel they are necessary, but not all of them (says the man from CT whose gas tax is the highest in the nation...!!!)

hotwire - sorry about your gas taxes. I'd like to see us move to alternative fuels.