The Memory of an Old Friend

I was going to write about the nature of time today, but for whatever reason, I can't get it to come out right, so I think I will make a small tribute to an old friend. Recently, through the miracle of Facebook, I reconnected with an old college friend, Lynda, who I hadn't heard from in years. She, her then husband and I and two other friends shared a house during my junior year in college. It was one of the best times in my college life, probably in my whole life. They were all wonderfully creative and good people and we had fun together. I have a few favorite memories of our days together.

One is dressing up in Victorian (or Victorian-ish) costumes for the Literary Journal photo. I was so shy and reserved that this was a big deal for me. I wish my scanner worked. It's a very silly photo but we had a great time making it.

My second memory is one I bore my friends with any time we play games. The five of us who lived in the house used to play Clue and other games with some regularity. I don't know what it is about me and Clue, but I almost always win. One afternoon we had played a few games and I was all set to win yet again, but I had to go to the bathroom. I returned, smugly announced that so-in-so did it in wherever with whatever the weapon was. Pulling the cards out of their little packet, I was stunned to discover that I was completely wrong. How could this be? I was so sure.... Well, of course, they had taken advantage of my absence to switch the cards. I thought it was wonderfully funny then and it still makes me laugh just thinking about it. It probably isn't that funny to anyone else. But it's one of my favorite stories so I have to share it. We laughed a lot in that house on Forest Avenue. I was as happy there as I was capable of being at the time.

The other thing that Greg and Lynda taught me was a profound life lesson. I had the delusional belief that I was luckier than everyone else on the planet and I used to like to treat us to things once in a while, especially home make chocolates from a little shop around the corner from our house. One day I was about to buy us a treat and they said, "let us do it." I started to argue with them about it and they said. "Did it ever occur to you that since it gives you so much pleasure to do this, it might give us pleasure to do it too?" I've never forgotten that. Receiving is also a way of giving. Generosity has many faces.

Greg, was a gifted artist and a beloved friend. In reconnecting with Lynda, I learned that he was murdered at about this time twenty years ago. I'm not sure of the exact date. I had spoken with him not long before and we had planned to get together for coffee and then we never did. I learned about his death - but not his murder - in the same week that my sister was murdered.

One other memory I have of those days is learning that Greg had a twin brother and that he had been killed in Vietnam. Daughter of an alcoholic, that night was one of two in my life when I got black-out drunk. I wish I didn't remember any of it. I can't imagine the pain Greg's parents have gone through to lose not just one son, but two to the worst kinds of violence this world has to offer. That is too cruel.

Anyway, yesterday I took a photo - not the best, I'm afraid, of an etching that Greg gave to me almost forty years ago when he and I were young and had no idea that the future would bring such violence into our lives. I wrote a poem for it at the time. It's not a very good poem and at 60 seems kind of like an amusing thing for my 20-year-old self to have written, but I will share it anyway. 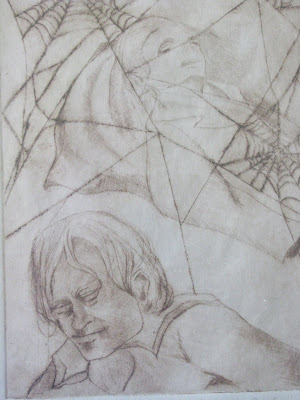 FROM AN ETCHING BY GREGORY JACKSON

Sleeping, my youth lies dead
Beneath the dust and cobwebs of old age
The pale head, cushioned by tattered rags
of unspent dreams
Lies musing peacefully
And I, in mourning,
Stand behind the net of slender threads
Afraid to rouse him from that useless slumber

Thank you, Greg, for having been my friend. I know you are with the angels.

Thank you Katherine for sharing this memory and your beautiful poem. You have enriched my life today - once again. j

"enriched my life" - jay is always so right on target.

I laughed at the Clue joke they played on you and it makes me happy to know you have found Lynda once again.

The etching is lovely and haunting. Your poem is wonderful. "useless slumber" is such a stunning way to describe a death that comes too soon.

Your poem illustrates the sketch perfectly and such a poignant memory.

I am really happy to hear that you have reconnected with Lynda (what a terrific name, btw) and from your words and memories, Greg sounds like such a wonderful friend and reading about your Clue nights (chuckling there!) and the thoughts on generosity-I really do feel enriched too. His sketch and your poem are perfectly complimented, as it sounds like your friendship was.

I cannot imagine losing both of my boys, nor do I wish anyone having to endure that kind of anguish.

Thanks, Jay... what a generous thing to day.

thanks dianne - I love that etching. It looks very much like Greg. I love that Clue story. I tell it a lot to a very limited audience who I'm sure are REALLY tired of hearing it.

snoopmurph - my time with Lynda, Greg , Terriberry (isn't that a cool name?) and - agh, I can't remember the other guy's name right now - was really wonderful. The friend whose name is refusing to give itself to me was a source of two life treasures - one that lasted until just before I left NYC was a huge paper daisy made out of index cards, with a big fabric circle in the center. It sounds awful, but it was really wonderful and hung on my wall until it fell down and Katrina (who was in her dying stage) did something unspeakable to it. His other contribution is one of my favorite ever sayings: "When my ship comes in, I'll be waiting at the train station." How can I not remember his name? I have always been awful with names. I feel like I betray him by not being able to remember. We were a happy quintent in that house.