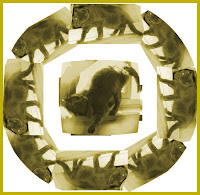 I'm a word person and sometimes a new word gets stuck in my head. This week, I've been reading my friend Linda's posts about autism and one of the things she wrote about was something called "stimming." Stimming is a way that autistic children (and really all of us on earth) find to cope with feelings of stress. For autistic children, it might involve flapping their hands and sometimes - as in the case of her young son - walking in circles. For myself, I play computer games or watch TV. If I could walk, I might pace, but that's not an option any more.

Anyway, Linda's article on stimming was in my head last night as sweet Tara Grace acted out the damage of her early life in her kitty version of stimming which involves muttering and circling the house, around and around and around... sometimes she just circles the window and my desk, making sure to stomp on my keyboard over and over (aggggh). I was watching a movie on the computer last night and she managed at one point to mute it. After I spent 10 minutes figuring out how to undo that not too good naturedly, I might add - she did it again. Within minutes of the movie's end, she stepped on something that took it right back to the start. Ironically, at the moment of this little act of torture the human, a little girl in the movie was singing Joni Mitchell's magnificent song, "The Circle Game."

After my very very worst self emerged and shrieked at poor Tara for just being herself, and as guilt and embarrassment at my reaction set in, my brain made a link to her behavior and stimming. Tara, I thought, is kind of like a feline version of a very mildly autistic child, only because she's a cat and not a child it's so very different. There's an element of humor in it. Her routine is so relentless, her muttering so passionate... it can make me laugh. It also worries me, though. Some days I feel like she will wear herself out and I feel so sad because she's not able to allow hugs. She will sometimes stop for petting - I think that's what she's seeking ultimately - some form of comfort. She's still too damaged from her early life to allow hugs. I can't pick her up and hold. I can't soothe her stress.

And I was thinking that this is just the tiniest taste of what it must be like for parents with autistic children. Tara Grace, after all, is a cat. She is my child equivalent, but she lives a cat's life. Nobody judges her for her circles. If anything they endear her to my friends. And she does not have to go out into the world. No ignorant adults or foolish children will stare at her or judge her because she's "different." She will never have to cope with the realities of operating in a world that doesn't always welcome eccentricity. Tara Grace won't have to go to school. She won't have to face the insanity of puberty with the extra burden of being different. She is safe here and sheltered from the difficulties of the wider world. As my cat, she is an eternal child and while I may worry about her, I know she's going to be ok.

I don't know how parents of even "typical" children do it, how they balance the joy and fear and responsibility of parenting. It has always seemed wrong to me that the "game" of life should be harder for some than others. At the same time I try to feel empathy for people struggling with the pain and beauty of their autistic children, I realize that I don't have a clue or a hint of a clue as to what it's really like. I have so much to learn.

I am anxious about this post. I don't know if I should post it. I don't want anyone to think that I'm comparing my cat to their children, that I am making light of something so serious and painful. I'm not. Obviously I've decided to post it in spite of my reservations. I tried to change the subject but it has refused to change and I've found that when that happens, there is usually some purpose that I don't understand. So I will risk it and hope that there is some value in these words that I can't hear through my anxiety and with the plea of forgiveness if I have offended in any way.

Just because I love it so much, I thought I'd share the Circle Game and it's lyrics. We really are all on a circling carousel in some ways. I've heard life compared to an onion where you peel away the layers as you move through experience. Either way - carousel of onion - it is an amazing ride.

Yesterday a child came out to wonder
Caught a dragonfly inside a jar
Fearful when the sky was full of thunder
And tearful at the falling of a star
Then the child moved ten times round the seasons
Skated over ten clear frozen streams
Words like, when youre older, must appease him
And promises of someday make his dreams
And the seasons they go round and round
And the painted ponies go up and dawn
Were captive on the carousel of time
We cant return we con only look behind
From where we came
And go round and round and round
In the circle game.

Sixteen springs and sixteen summers gone now
Cartwheels turn to car wheels thru the town
And they tell him,
Take your time, it wont be long now
Till you drag your feet to slow the circles down
And the seasons they go round and round
And the painted ponies go up and dawn
Were captive on the carousel of time
We cant return we can only look behind
From where we came
And go round and round and round
In the circle game

So the years spin by and now the boy is twenty
Though his dreams have lost some grandeur
Coming true
Therell be new dreams, maybe better dreams and plenty
Before the last revolving year is through.
And the seasons they go round and round
And the painted ponies go up and down
Were captive on the carousel of time
We cant return, we can only look behind
From where we came
And go round and round and round
In the circle game

Hey Katherine, I came by today to see what you were up to the day before the Wordzzle. I wrote mine a couple of days ago and will be posting it tommorrow.

Thanks for the Joni Mitchell song. I have the album and listen to it in the car when I need a hit of nostalgia or I'm just feeling like a 60s kid again.

I got a little recognition for being a child of the 60s when my story "Washington DC May 1971" was published this week on the #1 Blog in the Elders Niche "Time Goes By"
heres the link if you want to read the story.

I didn't think you were comparing a cat to a child. and even if you were - love is love. I felt you were looking for more ways to sense and learn and feel how things are for others - and that's a wonderful thing.

I read once about abused animals being used to help with therapy for abused children. The children were told of the animal's experiences and asked if they wanted to help the animal feel safer. I wish I could remember the name of the article or the program. It was very successful.

Siren will let me hold him but only if I'm walking around. He will stand on my lap, he will not sit on my lap. He copes, I accept :)

Joni is a Goddess

hi rich - joni does bring back the 60s doesn't she? Something kind of magic about that song, too. I haven't even started my wordzzles. Hope I move faster on them than I have on everything else today.

dianne - thanks so much... it is about love, really. I just couldn't get what I wanted to say said... frustrating morning. What a wonderful idea to use abused animals and abused children together.... Siren and Tara Grace sound much alike in many ways... and Joni is a goddess!

We love our children-cats, kids, pups. Tara Grace and Connor would probably have some super psychic connection-he relates to animals so well. Maybe it takes a friend to join in the circle game. You wrote beautifully-and I am happy that you posted. Because families come in all forms and yours counts every bit as much as mine or anyone else's and it is definitely love-even when we are completely flustered!

Joni is one of my favorites and I had forgotten this song-a great one!

hi linda - thanks so much. I'm sure that Connor and Tara Grace would bond instantly. And Angel too. Angel would want to play, Tara to be touched... thanks for your kind words about the post.

Joni Mitchell has something special in her voice - maybe it's love.

I am not offended by your comparison! I LOVE when someone not invested in the autism community takes an interest and tries to understand children like my daughter.

There is a school of thought that people with autism are "cat" people as opposed to the rest of the people who are more like dogs.Sorry, I can't remember who coined it, but I love the analogy. Come at a cat the way you approach a dog and you'll likely be swatted(figuratively). Let them come to you. Don't overwhelm, etc.

Thanks for the link above!

michelle - thank you... what you say about cats makes sense. It's probably good to be very conscious of your energy around autistic kids too, I would think. I suspect they are very sensitive to moods and tensions around them.