The Alphabet Backwards: "R" is for Reiki

Today's letter in the alphabet backwards series is "R" and there is no question for me about the topic. It has to be Reiki. Reiki is and has been a central part of my life for almost 30 (!!!) years now. It stuns me to realize it has been that long.

The hands in the photo below are channeling reiki. If you click on them, it will take you to a larger version of the photo for a better effect. I hope you'll try it and let me know what, if anything, you experience. But I'm probably getting ahead of myself. I guess I should tell you what reiki is first. 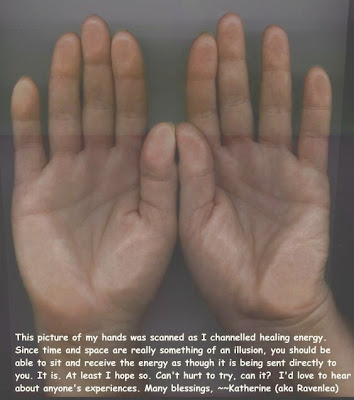 Reiki (which is pronounced Ray-key) is an ancient Tibetan form of hands-on healing. I learned about reiki at a workshop I did to learn a Hawaiian massage tecnhique called Lomi Lomi Nui. It was an awful workshop - a psychological and physical ordeal - that left my ability to walk permanently damaged. But that's a long, sad story for another day. I had already been to a different workshop where we explored the idea of hands on healing and I had loved doing it. At this Lomi Lomi Nui workshop I did some healing work on a woman who had sprained her ankle. It was a very intense experience. I could literally feel her ankle healing - and she could too. She asked me if I was doing reiki and I said "what's that?" She told me a bit about it and I thought it would be nice to put a name to what I was doing. Plus she had told me that one of the things learning reiki was supposed to do was to help provide empathic people like myself from absorbing other people's emotional garbage. That alone made it sound worth exploring. At that time in my life I had only just begun to realize that I was in some ways a sponge for other people's emotions - particularly negative ones. I knew people had always said being around me made them feel better an I had never quite understood it, had never understood either, why sometimes I would walk into a place feeling fine and minutes later be profoundly sad or weary. So anyway, I decided to explore reiki so I could a) give a name to the energy work I had discovered I had a deep love/gift for and b) see if I could get a bit of psychic armor in the process.

Let me start by saying that I was as big a skeptic as anyone when I first started exploring this stuff. Sounded stupid to me. Sounded like something people were probably talking themselves into. But then after a little bit of experience, I found there were things I couldn't deny. I could "feel" people soaking in energy that was moving to them through my hands. And it wasn't always the same. It varied from person to person, from experience to experience, even from place to place on the same body. For want of a better description, the energy moving between me and another person had "texture." It moved through me to them differently. Some people had walls up and when I described it to them, it made perfect sense. Some people swallowed the energy whole in big gulps. Sometimes it felt hot, sometimes cold. In the early days of working on people, I often saw images. Working on a friend of mine, I saw/felt her as soldier from Ancient Rome badly injured with a leather tunic bound into raw wounds. I felt (as did she) the quality of the energy shift from hot to cold as I removed this "vest." I didn't tell her until afterwards what I was experiencing, what I was working on. She's a nurse and she said that the shift we both experienced made perfect sense as to how you would treat such wounds, which were, effectively like burns. That's one of the things I love most about reiki - that it has it's own intelligence. It's not something that I do as much as something that is done through me. I get to participate in little miracles, but I'm not responsible for them. I don't create them. I'm just a kind of lucky witness.

My nephew - a skeptic if ever there was one - allowed me to put him on the table, just to humor me. He was studying a martial art called akido at the time and unknown to me, had a lot of pain in his wrists and elbows. He got of my table stunned that the pain was gone, convinced that there had to be some logical explanation for it. If it works on a skeptic as dedicated to logic and proof as my nephew, well....

These days I work mostly lo 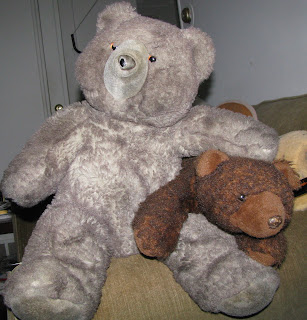 ng distance using a number of teddy bears - Raphael Emmanuel (the handsome grey guy in the photo) for people and Jasper and for cats and dogs. That's almost more astonishing than sitting in your living room with your hands on a teddy bear and experiencing sensations in someone miles away. It still astonishes me. I remember working on a woman years ago and feeling a long Capital I shaped incision running the length of her back, and feeling like (I know I sound crazy, but this is what I felt) angels were performing some kind of surgery along the incision. Talking to her after the session, I learned that she had suffered spina bifida (I think) in her childhood, had spent several years in a body brace and did in fact have an I shaped incision on her back. Wow.


Working on animals is so much fun. They don't put up any resistence as so many people

do. They just soak it in. If their humans are home when I work on them, they usually tell me they can time the start of reiki and finish of the session almost to the minute. One of my favorite long-distance animal stories is about a kitty who ended up being named after me (Raven's Reiki). I've kind of lost touch with her, but at the time I knew a woman in Australia who bred Siamese cats. One of her cats was in labor and she asked me to do reiki. She thought all the kittens had been born but when I worked on her cat, I felt like there were two left, one didn't feel alive and the other felt very weak. Because of this, she rushed her cat to the vet and low and behold - the vet discovered a still-born kitty and the barely alive Raven's Reiki. I reikied him for the next few days and he caught up with his siblings in a matter of days - something she said was unheard of in her experience. Pretty cool.

There's so much I'd like to say about reiki. It has so enriched my life. Anybody can do it. I think we are all born with the capacity to offer healing. Reiki is just one form of doing so. I like to think of it as unconditional love that comes through me to another person who opens his/her heart and body to receive it. There are other formal kinds of healing besides reiki - Kwan Yin, Johrei - are just two others. I think of it as picking up on different radio frequencies. However you channel it, it's still unconditional love, just coming through different air waves. Something like that. I personally don't think training and attuments are necessary for one to tap into offering healing. What I think they do is strengthen the connection or maybe wake up skills that have lain dormant. Workshops offer group experiences which I think make them worth the price. Lots of people now offer on-line and long-distance attunements. (An attunement is basically a ritual introduction/induction.) If you think about learning reiki and you can manage it, do go for a live workshop because it offers you a chance to experience using the energy on a number of other people and discovering how unique each reiki experience is. Like therapy, I think learning something like reiki is a blessing everyone can benefit from.

I'm going to stop here. I've already probably written too much. You can check out my reiki website for more information if you are interested. Just for the fun of it, click on the healing hands picture I posted at the top of this essay. It will take you to a page with a larger version. As the picture says, the hands are channeling reiki energy. I can feel it. I hope you can too. I'd love to hear about what, if anything, you experience.

I've always wondered how to explain how I can feel great and then walk into a room and feel awful - a sudden burst of negative energy.

I've been reading more about reiki ever since I absolutely believe you helped Mia and that one evening that Siren was calmer than ever.

Also - my dearly moved on cat JR always felt better after I massaged him, even the vet believed it had a lot to do with making his last year so comfy and peaceful.

dianne - I wish I had realized much earlier in my life about that empathic thing. I think a lot of people who are agoraphobic tend to be empathic also.

I'm so glad you felt like the reiki helped Mia and Siren. How are they doing? Let me know if you want me to reiki them again.

Raven, I heard about Reiki on Oprah from Dr. Oz (LOL) I would love to try it some time. I had surgury this year and they came in befor hand and gave me a massage.. first(real) one ever. o my goodnes..!!!
Good guess on the trees, but they are aspen, not birch.. Thanks for sharing, I am back to your post now to enlarge the hands. (grin)

I do need to try this with Connor too and myself. I am really glad you wrote about it because I don't know that it is well-understood. I know that I didn't have any idea-I thought it was some type of massage technique! :)

I have heard about it but have not tried it. If you are able to help others heal, it is a very special gift indeed. :)

Well, I had to wait to reply to this untill I had rubbed the duckbumps off my arms!! How wonderful to have this ability! To be able to litterally 'touch' someone and give them a peace they haven't had is awe inspiring.
You're a beautiful woman Raven. Inside and out! :)

My apologies to everyone for not replying sooner. My computer was down all day today. It is now hopefully vastly improved.

stacey huston - massage is good. I hope you do get to try reiki. It's quite amazing. Would love to know if you felt anything with the healing hands page.

snoopmurph - set up a time with me and we can experiment with some reiki for Connor - and for you.

hi aud - I don't think of myself as a healer - more a channel/facilitator. I think people heal themselves. Something like that. It's an amazing thing to experience... and anyone can do it.

tt - shucks... you're going to have my head so swollen, I won't be able to get through doorways. Thanks for your kind words.