Warning, today's reminder is going to be an un-adorned political rant.


To say that I'm angry is like calling a force 10 hurricane a little rain. I'm so pissed off that I can barely keep my head from exploding. Between hot weather and uncomfortable nights and dreaming about idiots, I'm tired and cranky. This infuriates me on a moral level and it terrifies me on a personal level. If my SSD money doesn't come in August, I will lose my good credit and possibly my home. There is no cushion protecting me. I'm scraping by on my stipend because I pay for some of my food on credit. I don't live lavishly. A life of working for non-profit agencies, the stubborn stupidity of spending down my pension and my savings before asking for help have led me to a place where I live in constant peril of "not making it" or of losing everything. Not that I am not very lucky for a person in my position. With the help of one of my nieces and the State of New York, I got my little house and can no longer be vicitmized by New York State's total lack of protection for renters who don't live in big cities. But I digress. I'll be pissed off about that some other day.  Today I'm simply furious  and humiliated for my country that we can be held hostage to a small group of fanatics who think nothing is more important in this life than making sure billionaires don't pay taxes on the interest on their saving and other loop-holed and exempted items.... allegedly for fear that "TORRENT" of jobs that they have been creating for us peasants might be slowed... What? There has BEEN no torrent of jobs trickling down? All the more reason not to tax them!  It is so insane that I feel like I'm living in some kind of parallel universe or like my country has become some kind of asylum and the inmates have taken over.  It might be funny if the consequences were not so dire... and not just for me.  For every American, even billionaires. For the whole world economy.


How ironic that the tyrants holding the nation hostage have named themselves after a group that was acting against tyranny. Yet they tyrants in their own right, holding every American hostage to their personal vision of economics, which, as far as I can tell, bears little relationship to reality. The Regressive approach to resolving debt reminds me of a family trying to pay off their credit cards by turning off the heat and save on expenses by not feeding Granny and the kids. They fail to factor in that this short-term "savings" will have expensive consequences like the pipes bursting when they freeze or that Granny and the kids will either get sick and require medical care or die and require funeral expenses, both of which are far more costly than feeding them. Likewise, in another "cost saving" stroke of genius, they decide to forgo dealing with the termite infestation and the leak in the roof (call that the infrastructure). They fail to consider that these untended problems will eventually make their home uninhabitable as well as eroding its market value.  Meanwhile, our dim-witted couple takes Rich Uncle Henry out to dinner once a month (or more) in the hope that he will leave them his money when he dies. Rich Uncle Henry (rightly) thinks they are a pair of idiots, but a free meal is a free meal. He intends, however to leave his estate to his own children.


Another way to look at the concept of cutting taxes to help fix the deficit is like quitting your second job because you're having trouble making ends meet. Can anyone say counter-intuitive?


Because our news media is so completely averse to doing its job and so inept, even the so-called "liberal" stations basically act as funnels for Regressive talking points.  Balance means unchallenged sound-bytes repeated over and over. The discussion, thus, is always framed in terms of trying to respond to simplistic falsehoods about complex subjects with sound byte responses rather than truly delving into issues. A case in point at the moment. The media itself - and even many Democrats - now hold debt discussion in terms of out of control spending, the implication that spending is inherently bad. That's nonsense, of course, which my analogy of not feeding the kids hopefully points out.


The two primary causes of our current debt situation are the war costs and the Bush tax cuts. The third most expensive thing is interest on that debt. 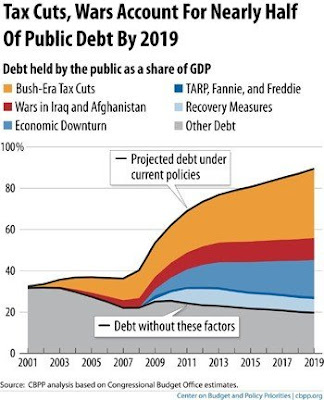 How we managed to fall prey to the kind of mass hypnosis that sets in every time the word taxes is mentioned is a mystery that bears scrutiny. Like Pavlov's dogs, at the mention of taxes we become salivating idiots muttering "bad, bad," though in fact taxes have a purpose. We need them to build and maintain roads, to fund armies (mixed feelings about that, but), police forces, to protect our environment, make sure our food supply is safe, to build schools... We also need them to care for citizens in need.  There's a reason our states are struggling. There's a reason that our infrastructure is in disrepair and antiquated in comparison even to many 3rd world countries. It's because tax cuts at the federal level trickle down to the states and towns and either local taxes get raised or services get cut. Or both. And we all suffer.


The all taxes and all spending school of thought is self destructive. Let's look at what spending that Tea Party Tyrants want to cut. Infrastructure, food for destitute children, environmental protection, research into alternative energy... the list goes on and on.  These are relatively minor expenses that go to the heart of survival for individuals and our society as a whole.  Waste! Profligate spending wail the Tea Party geniuses. Military spending ( even on things the military doesn't want) is grand, though. The more the better.


There's no logic to it. I don't want my country to default on its debt, but I also don't want it to be held hostage to deranged bullies. And frankly all the people who blame Obama for "caving" to these people who care first about making sure he accomplishes nothing, second about their political party, and MAYBE third about our country.... I'd like your solution to handling them. The choices they have given him are pushing the country off a steep cliff or a less steep cliff. He has fought hard for us but his concern is saving the country, not his own hide. For that he has received scorn from even those who should have gone out and voted in which case the Tea Party never got control in the first place and we would not be tied to a stake while they do a victory dance and accidentally (or maybe on purpose) set the nation on fire.


Guess that's it for now or this will never get posted. Not going to go back and read over this. Just going to post it as it fell off my fingers.

WISHING YOU A LOVELY DAY!
I'm trying to have faith in the power of good,
but some days it's not easy.
Posted by Raven at 1:06 PM

Excellent post, Raven, and right on target. What a mess!