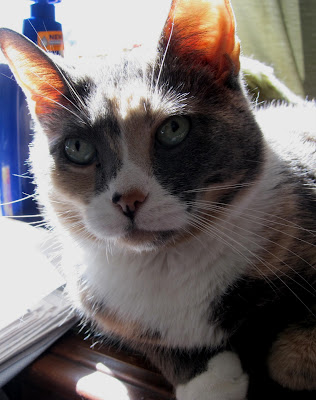 Well, today was a pretty darn good day, all things considered.  I splurged on lottery tickets and won  $102. Add the surprise check I got for $22.55 from an unexpected source and a check from my niece Diana to thank me for reiki-ing Simon, and, well... the demons of poverty seem a little less threatening for one month at least.  How cool is that!  Cat litter for the next 3 months arrived so I can put off worrying about that for a while.  My nephew did a radio interview on CBC (Canadian Broadcast Radio - I think that's what it is).  You can listen here if you would like. Only 5 minutes. Beyond that, my spirits have begun to lift.  It was chilly. In the 30s and the windows are all closed, but the house felt snug with no heat on so that was nice too. I wrote checks for my bills and just have to put them into the mail box tomorrow and that always feels good too.  Angel was in a photogenic mood today, too, which is always nice. 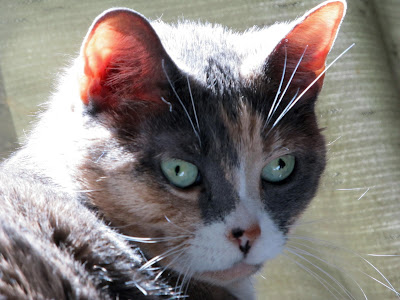 I have a demon to fight. I don't know if I mentioned (I probably did) that the new Angel gate that Delware Opportunities worst contractor ever did had a run-in with one of my friends and now doesn't close properly without a lot of coaxing. I can't always manage it, which means my front door doesn't close, which means when it gets really cold, that's going to be a problem. So I wrote to Del. Opp and they said they called him but he hasn't gotten in contact (big surprise) and so I wrote back to the guy at Del. Opp. he just sent me the guy's phone number so I could call myself. This is panic territory for me. I feel like I'm a bad person for asking them to fix it. I fear they will be mad at me. I fear they will refuse. I fear my own annoyance, which is pretty intense. So anyway, you get the idea. Lots of fear. 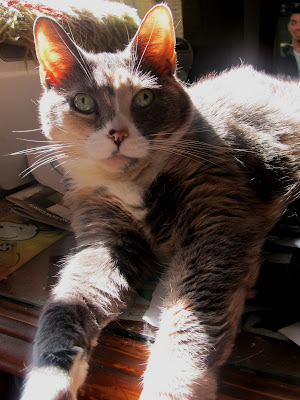 Interestingly, that was one of the things one of the  Healing with the Masters conversations - Sonia Choquette -  talked about opening your spirit and also about dealing with fear.  For the first, she had the host list things she loved and feel how it changed her body and her  energy. Later in the converstation she had her talk about things she was afraid of. She would state something and Ms. Choquette would tell her to open her eyes and look around and tell her what she saw, the theory being to ground her in the present and out of the projection that is fear. I thought it was quite interesting that the things the host came up with when she came back from fear was almost all things she had listed in her love list.  But anyway, it was an interesting exercise and I may work with it to get myself to call Dominic the crappy contractor and hopefully persuade him to fix the gate. 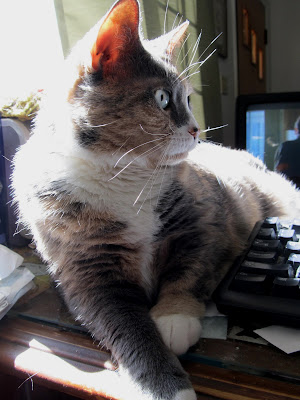 I know this is running long, but I also wanted to share today's Neale Donald Walsh email because it's very thought-provoking and profound, I think... and kind of works with the subject of fear... or at least the way I deal with fear....


On this day of your life, dear friend,
I believe God wants you to know...
...that mastery is not measured by the number of terrible
things you eliminate from your life, but by the number of
times you eliminate calling them terrible.
The Buddha brought suffering onto himself, to look into
the face of it, to see if he was that,and, if not, to see
who he then was. Jesus allowed himself to be cruxcified,
to demonstrate who he was. And what do you think you
are doing here?
Why bother with this relative world if not to know yourself
in your own experience? And how else to do that except
through the encountering of that which you are not?
Love, Your Friend....

I've been using the Thank You for Everything Mantra a lot of late. I'm still struggling with the sore on the back of my leg. It's almost healed, but not quite and not helped by the fact that something in me seems to have a vested interest in re-inflaming it when it's almost healed. You know how healing itches sometimes... and I do great and then I don't.... It's not easy being me.  So anyway, I've been grasping at the Thank You For Everything a lot to pull myself back from whiny world, where I am sometimes prone to go when uncomfortable, unhappy, scared......


One last thing before gratitude... New stray (or indoor/outdoor) cat on the block. These photos aren't that good, but I like the action. I don't the he caught anything. 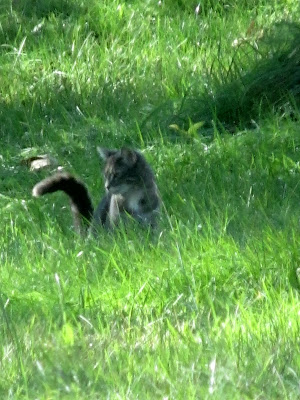 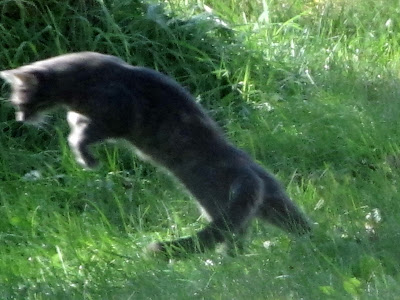 Some things I'm grateful for today: (Items in red are pre-gratitude, an exercise in appealing to. alluring. the Creative Forces of the Universe into acknowledging my gratitude by supplying that for which I have expressed gratitude. I did win $100 today. It's a start.) 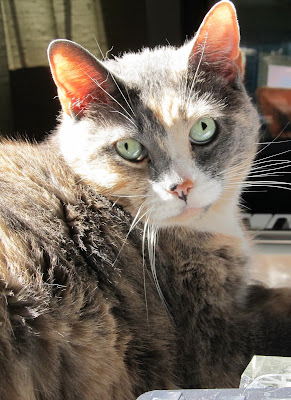 MAY YOU EMBRACE EVERY MINUTE OF
LIFE WITH WONDER AND JOY
(and may it be easy to do so)
Posted by Raven at 11:58 PM

Angel gate? A cat flap, maybe? Your reluctance to phone the crappy contractor strikes a chord with me - I absolutely hate anything that might lead to confrontation/rejection. On the other hand, he was paid to do a job of work, which clearly has not been completed satisfactorily. If you do phoje him, you could point out the difficulties the incorrect installation is likely to cause this winter. Also, nobody likes to be thought badly of, so you might go along the lines of 'I know you'd never knowingly do a bad job, but I think this one just needs a little more of your time" or something like that. Good luck.